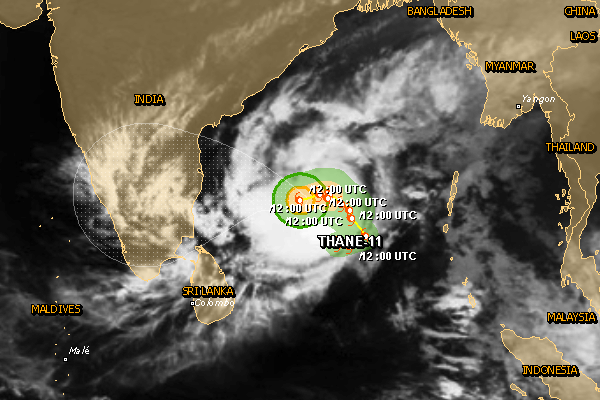 Hyderabad:  High tidal waves lashed the coast of Andhra Pradesh on Wednesday under the impact of severe cyclonic storm 'Thane' over the Bay of Bengal, the Met Office said. The storm is expected to hit the southern shoreline by Friday morning.

The India Meteorological Department (IMD) has issued an 'orange' alert, one step below the red alert put out for a really severe cyclone. According to the IMD, 'Thane' remained practically stationary and later intensified into a severe cyclonic storm. It lay centered about 500 km east-southeast of Chennai.

The system is likely to move towards the coast, intensify further during the next 12 hours and cross north Tamil Nadu coast between Nagapattinam and Chennai and south Andhra Pradesh coast between Cuddalore and Sriharikota around Friday morning.

However, there is probability of slight weakening of the cyclone before it hits the coast. The weather office has forecast rainfall at most places, with isolated heavy rainfall over north Tamil Nadu, Puducherry and south coastal Andhra Pradesh from Thursday.

The intensity of rainfall would increase with heavy to very heavy showers at a few places and isolated extremely heavy rainfall (25 cm or more) from Thursday evening, and could extend to Rayalseema and north interior Tamil Nadu.

Squally winds with speeds reaching 45-55 kmph are likely to commence on Thursday. The wind speed may touch 125 kmph when the storm hits the shore. Storm surge of about one meter height above the normal sea tide would inundate the low lying areas of Nellore district of south coastal Andhra Pradesh and Chennai, Tiruvallur, Kanchipuram and Villupuram districts of north Tamil Nadu when the storm hits the shore, the IMD bulletin said.

Fear gripped coastal Andhra as high tidal waves lashed the coast under the impact of 'Thane'. Visakhapatnam Cyclone Warning Centre said the sea conditions would be rough to very rough and advised fishermen not to venture into the sea. Those who were out at sea were advised to return to the coast.

Meanwhile, due to high tidal waves of 8-10 feet, sea water inundated some places in Nellore, Prakasam and Srikakulam districts. Fishing boats anchored along the coast were either washed away or damaged due to the tidal waves since Tuesday night.

The road between Uppada and Kakinada in East Godavari district was cut off on Wednesday as the waves damaged the embankment and the sea water overflowed the beach road, an official said. High tidal waves accompanied by squally winds damaged boats in several villages in Srikakulam district also.

Two fishermen were drowned when their boat capsized in high sea on Tuesday evening close to the coast at Malkipuram in East Godavari district. Five others swam to safety. About 200 fishermen of Guntur district who were reported missing returned safely with the help of Coast Guard on Tuesday night. The families of the fishermen spent anxious moments as they had not returned home despite the cyclone warning by the weather office.

All nine coastal districts in Andhra have gone on high alert. Control rooms have been opened in the offices of district collectors. Special officers were appointed in the coastal blocks to take up evacuation and other measures to minimise loss of lives and damage to property.