Cyclone Thane crosses land at 4.30 am on Friday at exacly 11.8 N and 79.7E, that is at Puducherry. While crossing, it sustained core pressure at 983 mb, which weakened rapidly on hitting land. 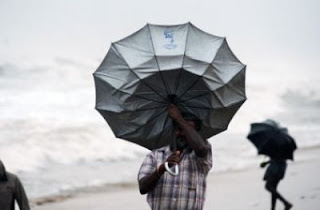 Severe cyclonic storm "Thane" today lay centred very close to Puducherry and was likely to cross Tamil Nadu coast in a few hours and bring in 145 kmph of gale winds.

The cyclonic storm brought in copious overnight rainfall coupled with squally winds uprooting trees in some places of Chennai and elsewhere. Weather officials said heavy rainfall to extremely heavy rainfall ranging up to 25 cms would occur at many places over north Tamil Nadu, Puducherry coastal Andhra Pradesh and Rayalaseema. Gale winds with a maximum speed of 145 kmph was likely in the next few hours and it would then decrease gradually, it said, adding maximum wind speed of 115 kmph to 125 kmph had ben recorded early this morning. The sea condition was phenomenal along and off north Tamil Nadu, Puducherry and adjoining south Andhra Pradesh coast, the weather office said and advised fishermen against venturing into the sea. Meanwhile, flight services were also disrupted due to the cyclonic storm with four international services, including those bound for Kuwait and Kuala Lumpur were cancelled. The state government had declared holiday for educational institutions in coastal districts, including Chennai, Cuddalore and Tiruvarur today. The government said it has put in place measures to face the effect of the storm, with special teams of officials formed to monitor the situation. PWD Secretary M Saikumar had held a meeting yesterday and discussed steps to be taken on a 'war footing' to tackle the effects of the storm.