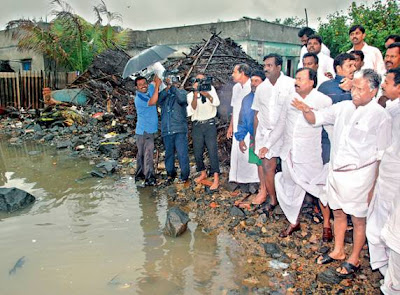 Severe cyclonic storm 'Thane' today lay centred very close to Puducherry and was likely to cross Tamil Nadu coast in a few hours and bring in 145 kmph of gale winds.

The cyclonic storm brought in copious overnight rainfall coupled with squally winds uprooting trees in some places of Chennai and elsewhere.

Gale winds with a maximum speed of 145 kmph was likely in the next few hours and it would then decrease gradually, it said, adding maximum wind speed of 115 kmph to 125 kmph had been recorded early this morning.

The sea condition was phenomenal along and off north Tamil Nadu, Puducherry and adjoining south Andhra Pradesh coast, the weather office said and advised fishermen against venturing into the sea.

Meanwhile, flight services were also disrupted due to the cyclonic storm with four international services, including those bound for Kuwait and Kuala Lumpur were cancelled.

The state government had declared holiday for educational institutions in coastal districts, including Chennai, Cuddalore and Tiruvarur today.

The government said it has put in place measures to face the effect of the storm, with special teams of officials formed to monitor the situation. PWD Secretary M Saikumar had held a meeting yesterday and discussed steps to be taken on a 'war footing' to tackle the effects of the storm.

A report from Puducherry said the cyclonic storm, which hit the union territory since the early morning today, has caused extensive damages.

Puducherry was cut off from the neighbouring districts of Villupuram and Cuddalore in Tamil Nadu as several trees fell on the roads due to the impact of gale winds, official sources said.

Bus services between Puducherry and Tamil Nadu and other distant pockets were suspended due to disruption of traffic.

Power supply was suspended since last night as a precautionary measure.

Chief Minister N Rangasamy said revenue authorities have already geared up machinery to take all precautionary measures to protect people living in vulnerable areas. PWD officials were on alert to rise to any exigency.

He said the current cyclone is the severest in the history of Puducherry.

Delivery of newspapers was also hit due to winds and heavy rain. Flying squads were functioning at the instance of the revenue and fire service authorities.

Official sources said that the control room functioning in the premises of the Collectorate had received more than 10,000 calls for assistance since last night.

A holiday had been declared for all schools and colleges in Puducherry and Karaikal regions today.

Officials said this was the first time that a high intensity cyclone was hitting the union territory after the one in the 1950s.

Posted by Rajan Alexander at 10:28 AM