Is Arctic Oscillation (AO) about to flip?

The Arctic Oscillation (AO) has been positive 99 out of 108 days since 01-SEP; however...there are a few signs suggesting a change for the better may be afoot.

The first sign points to a weakening polar vortex... 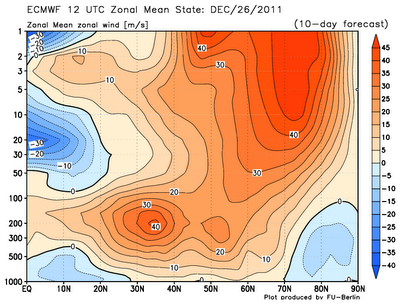 The wind speeds are currently running ~100 kt in the last few millibars @40°N and are forecast to weaken to ~45 kts at D+10.  Also note the development of deep easterly flow below 100 mb suggesting the presence of a hi-latitude anticyclone and an strengthening sub-tropical jet.  A hi-latitude HIGH would flip the sign of the AO to negative.

The second sign points to a warming stratosphere over 90°N... 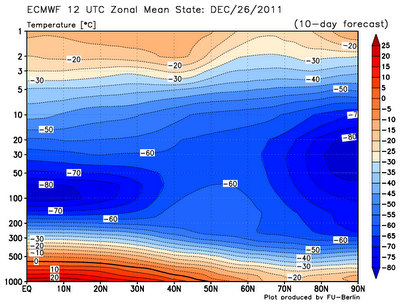 If the warming persists and works its way down...this would build and anti-cyclone aloft which could propagate toward the surface and create of re-enforce a negative AO.

The last sign points toward a bloated chunk of cold air from Siberia migrating into eastern NOAM INVOF the Hudson Bay.... 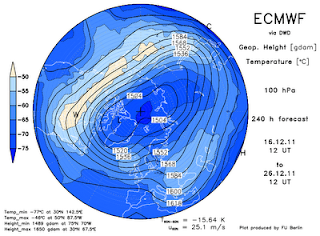 Note the 'W' in the light orange area INVOF the Hudson Bay.  This frigid feature propagated east from Siberia.  It indicates a warm stratosphere and low geo-potential heights in the troposphere.

The state of the AO through the years (1950 - 2011) at fifteen days into the meteorological winter.

Certainly appears to have a degree of periodicity...especially the seven (yellow) and 11-year traces (red).

Posted by Rajan Alexander at 5:07 PM