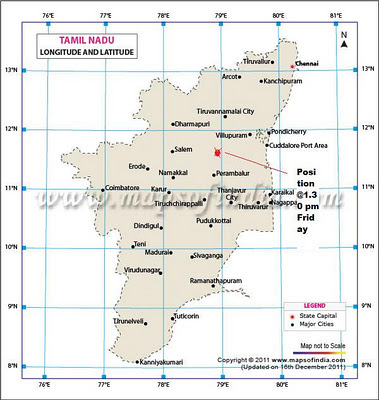 By friend Rajesh Kapadia who administers the blog Vagaries of Weather has been working overtime for more than a week tracking the path and intensity of Cyclone Thane. In the above map, Rajesh provides the Cyclone's position as @ 1.30. Rajesh observes: "System pressures weakens to 993 mb and surface winds at 70 kmph. System moving west, slightly South."
Here's the latest update by NetIndian on the Cyclone Thane 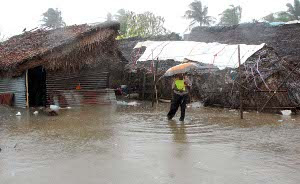 
According to a bulletin issued by the IMD, the cyclone crossed the coast between 0630 and 0730 hours today.It then continued to move westwards and weakened into a severe cyclonic storm and lay centred at 0830 hours near latitude 11.80 North and longitude 79.50 East, about 30 km west of Cuddalore and 35 km southwest of Puducherry.The system is likely to move westwards and weaken further, the bulletin said.

Under the influence of this system, rainfall at most places, with heavy to very heavy falls at a few places, would occur over north coastal Tamil Nadu and Puducherry during the next 12 hours and over north interior Tamil Nadu during the next 24 hours. Rainfall at many places, with isolated heavy to very heavy rainfall, would occur over south coastal Andhra Pradesh during the next 12 hours and over Rayalseema, north Kerala and south Karnataka during next 24 hours, the bulletin said.

The cyclone is expected to cause extensive damage to thatched roof and huts and minor damage to power and communication lines due to uprooting of large avenue trees. Flooding of escape routes is likely and the storm could also damage the standing rice, groundnut and maize in coastal districts of Tamil Nadu and rice and groundnut in coastal Andhra Pradesh.


The IMD has suggested total suspension of fishing operations in the area and shifting of coastal hutment dwellers to safer places. People in the affected areas have been advised to remain indoors and cooperate with the disaster management authorities.


UNI adds from Chennai: "Heavy rains lashed the coastal districts of Tamil Nadu since early this morning, disrupting normal life.Schools and educational institutions were closed for the day in all the 13 coastal districts of the State in view of the heavy rains forecast. In Chennai and suburbs, people woke up to blustery wind conditions and a steady flow of rain."


The rains, which were accompanied by squally winds, led to water logging in several areas, forcing people to remain indoors. The sea water rose to a height of more than two ft and had invaded the land off Marina.Police were maintaining surveillance along the entire stretch of Marina and public were barred from entering the beach, where boats and barricades were tossed up in air due to gusty winds. Patrol police were advising people and morning walkers, who were very few in numbers, not to enter the beach.

Sea water had entered the service road on the Marina, which was located about 500 m from the shore. In the adjoining Foreshore Estate, people living on the shores, spent sleepless nights as the sea water inundated their huts and houses. Several people were evacuated to safer places.

Traffic was disrupted in several parts of the city as squally winds uprooted trees. The cyclone also impacted train and air services as a few international flights coming to Chennai were cancelled. Southern Railway announced that train services were also affected with the cancellation of a couple of trains.

As the rains were accompanied by strong winds, power supply was disconnected as a precautionary measure in some areas.Reports received here said normal life remained crippled in the coastal districts of Cuddalore and Nagapattinam which bore the brunt of the rain havoc as these two districts were located close to Puducherry, where the storm crossed the coast.

The district administration has taken all precautionary measures to tide over any emergency.Traffic on the Villuppuram-Puducherry road was hit due to uprooting of trees under the impact of strong winds.In Nagapattinam also normal life was hit as the sea waters rose phenomenally and people living near the coast were being shifted to safer places and relief centres.A round-the-clock control room was set up in the coastal districts to monitor the situation.

Posted by Rajan Alexander at 7:51 PM