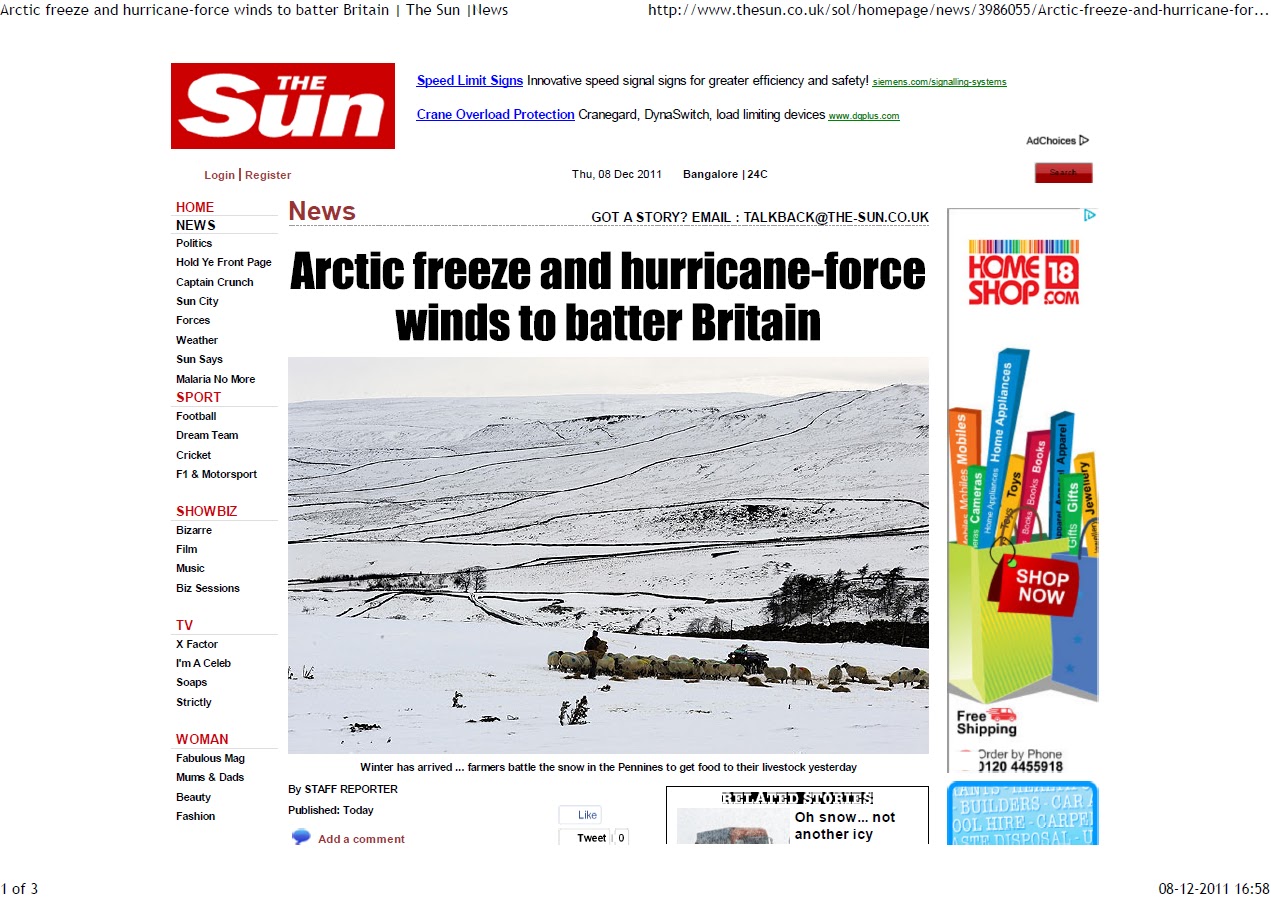 Experts warned a “severe” cold snap would take hold from today with hurricane-force winds set to hammer parts of the UK. Gales of up to 100mph will make it feel as cold as minus 10C (14F)and create blizzard-like conditions in areas where heavy snow is forecast.

The Met Office yesterday issued a maximum-level red extreme weather warning for winds today and tomorrow in the North. The red alert, issued only a few times a year, was not even triggered in September when Hurricane Katia caused widespread damage to buildings.

In addition to severe weather warnings for strong winds and heavy snow, the Met Office yesterday put out a cold weather alert for the west of the country.

The level-2 alert, given in conjunction with the Department of Health, warns of

“increased health risks to vulnerable patients” today and tomorrow. It follows warnings heavy snow could fall as far south as the west Midlands, and even London by Monday, with ice likely to cause chaos on roads and transport networks.We have issued a level-2 alert to let vulnerable people know and so health services can get their resources ready"

"Up to a foot of snow is expected on high ground in Scotland – with four inches possible in Birmingham. The Cold Weather Alert system – which has four levels from “preparedness and long-term planning” to “emergency” – warns when severe weather is likely to significantly affect health. We have issued a level-2 alert to let vulnerable people know and so health services can get their resources ready. If it pans out as predicted, the alert could be upgraded to level-3.”

Patrick Sachon, health forecaster at the Met Office, said there were concerns snow could make it difficult to get ambulances to the elderly and vulnerable. He said:

“There is also another problem – people falling on the ice and A&E resources being stretched. People need to be careful, it is going to be cold and there is going to be quite a bit of snow.”

“An extremely powerful weather system is bearing down on Scotland. A red warning has been issued – this is as serious as weather gets in our country. This is incredibly serious weather with strong winds in Scotland, with flooding also possible as snow thaws. There will be power supply problems, transport problems and we could see structural damage. People should stay up to date with forecasts.”

If the warning is upgraded to an amber level-3 alert, health and care workers must contact the ill, elderly and vulnerable.

Experts say people most likely to die in cold weather are those in fuel poverty or living in cold, damp accommodation, the elderly and people with underlying health problems.

“Because of the cuts to winter fuel allowance people are scared to turn their heating on.Last year nine pensioners died an hour during the cold snap. If the temperatures drop there is a real risk elderly people could die.”

"It is going to be a real shock to the system. An Arctic blast from the North-west is drawing in northern air. “We are looking at blizzards, freezing temperatures feeling as low as minus 10C in the wind, and travel chaos a real possibility.”

“Can you plan your journey to travel before the worst of the weather or wait until it has passed?”

After an unseasonably mild November, this week Scotland and the North have been hit by blizzards and up to four inches of snow.

Posted by Rajan Alexander at 1:23 PM