Indur Goklany: Oxfam—Betraying its Roots and Sabotaging its Own Mission

Indur M. Goklany is a science and technology policy analyst for the United States Department of the Interior, where he holds the position of Assistant Director of Programs, Science and Technology Policy.

He has represented the United States at the Intergovernmental Panel on Climate Change (IPCC) and during the negotiations that led to the United Nations Framework Convention on Climate Change. He was a rapporteur for the Resource Use and Management Subgroup of Working Group III of the IPCC First Assessment Report in 1990, and is the author of Clearing the Air (1999), The Precautionary Principle (2001), and The Improving State of the World (2007). 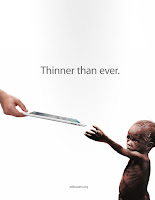 On its website Oxfam reminds us that its name comes from the Oxford Committee for Famine Relief. Today it claims to work to “find lasting solutions to poverty and injustice.” So imagine the surprise when I read on WUWT that Oxfam is now pushing an international tax on maritime transport.

Such a tax would increase the price of all goods that are traded via shipping. First, it would add to the difficulties that many developing countries have in meeting their demand for food. In particular, a substantial share of the food consumed in developing countries is imported:

·        In least developed countries, cereals account for 57% of the calories consumed. But net imports of cereals amount to over 15% of domestic production. [Data from FAOSTAT.]

·     In Africa, cereals account for 50% of food calories consumed, but net imports amount to 41% of indigenous production.

Thus, even a small increase in the price of imported crops would push many who are already living on the margin in these areas into poverty and hunger. The UN Food and Agricultural Organization estimates that 925 million people suffer from chronic hunger worldwide. Adding to these numbers would seem to be antithetical to the purpose of the Oxford Committee on Famine Relief. 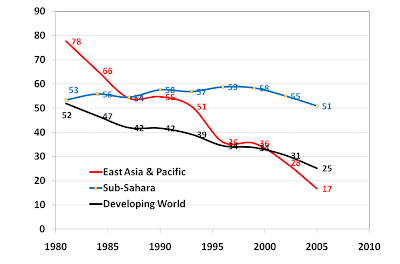 This figure shows that the most spectacular reductions in poverty occurred in East Asia and the Pacific, where the number of people living in “absolute poverty” (defined as living on less than $1.25 per day in 2005 dollars), dropped from 1,071 million to 316 million between 1980 and 2005. And as anyone who has bought anything in the past few years ought to know, their economic growth was driven substantially by trade.

To summarize, despite Oxfam’s claim that it works to “find lasting solutions to poverty and injustice,” the policies it pursues assures that it will never be out of a job. 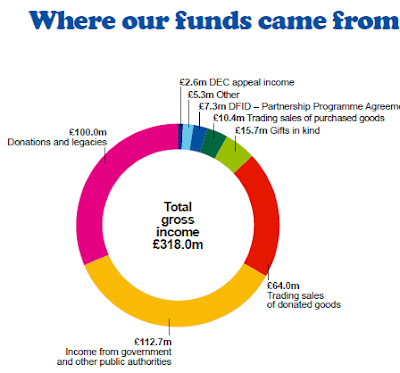 As seen from the pie diagram, more than 1/3rd of Oxfam's revenue is from official sources.  And as share of official aid to total revenue increases, the more Oxfam aligns its policy to find a fit with those congruent with official aid and less so  with the people of developing countries which it arrogates itself to speak on their behalf.

So when it becomes a toss-up between the priorities of the people of the developing countries and of official aid, Oxfam opts for the latter so much so, Oxfam's policies today find a more tighter fit with the World Bank rather than the constituency which it claims to represent.  Its advocacy of global shipping is just one expression of this reality. The more dangerous advocacy is of climate smart agriculture which causes more starvation and poverty.

Posted by Rajan Alexander at 12:16 AM