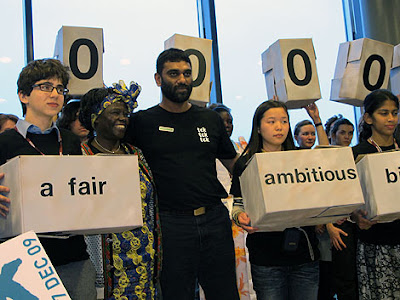 Six Greenpeace campaigners were arrested on the sidelines of the UN climate conference on Monday as they protested against corporate responsibility for carbon emissions. The six were detained as they tried to hang a banner reading "Listen to the People, not the Polluters" at a Durban hotel where a "Global Business Day," hosted by business organisations, was taking place.

The protest aimed at so-called “Dirty Dozen” corporations which Greenpeace says are pulling political strings to stifle progress towards a global climate deal. The incident happened outside Durban's International Conference Centre (ICC), which has been declared United Nations territory for the duration of the 12-day marathon.

A little later Kumi Naidoo, Greenpeace international chief was expelled unceromoniusly by UNFCC. He was escorted away after he led an occupation of the hallway outside the plenary room at the International Convention Centre, which has been declared UN territory for the talks.

Blue-shirted UN security guards led all the protestors away in groups of two or three through a side door except a young man and a woman, both with NGO badges, who refused to move. After 15 minutes of negotiations they were physically removed, the man carried arms and feet by two policemen, and the woman lifted into a wheelchair, an AFP journalist saw.

A security officer directing the policeman said that the protestors were not being arrested. The protest had started several hours earlier when the Maldives' environment minister, Mohamed Aslam, flanked by Naidoo, joined about a hundred green activists credentialed to attend the talks.

"Action against climate change in 2020 will come a decade too late for poor people on the front-line - they urgently need it now. Their lives are already ravaged by floods, droughts, failed rains, deadly storms, hunger and disease and we know that these disasters will get worse and more frequent as climate change bites."


Adow said the only "notable achievement" of the Durban talks was the agreement reached that the green climate fund - designed to assist developing countries combat global warming - would soon have staff and an office. However, money was still needed to get this fund going.

"We cannot allow the Green Climate Fund to wither on the vine," said Celine Charveriat of Oxfam. "Governments must identify significant and predictable sources of money for the Fund without delay, such as a tiny tax on financial transactions and a fee on emissions from international shipping".

Oxfam, issued a statement that seemed to summarize Durban succinctly:

“Negotiators at the UN climate talks have narrowly avoided a collapse, agreeing to the bare minimum deal possible. The plan gets the Green Climate Fund up and running without any sources of funding, preserves a narrow pathway to avoid 4 degrees of warming and gets a second commitment period of the Kyoto Protocol without key members.”

Reacting to these resolutions, Friends of the Earth International climate justice co-ordinator Sarah-Jayne Clifton said the resolution of the talks indicated that ordinary people had been let down by their governments.

"The noise of corporate polluters has drowned out the voices of ordinary people in the ears of our leaders," Clifton said.

Mother Jones: Nor was there a clear decision on the existing Kyoto Protocol, the first commitment period of the treaty ends in Dec. 2012. The text calls for an extension until either 2017 or 2020, but leaves a decision on the date for next year. And while it moves the creation of a Green Climate Fund to help poor nations both cut emissions and adapt to climate change forward, it does not include any decisions about how to put money in the fund. Several countries, including Russia and Nicaragua, lodged complaints about the last-minute decisions and that their concerns with the text had not been addressed.

"Over the past 17 years, they've kicked the big issues down the road," said Samantha Smith, leader of the global climate and energy initiative at the World Wildlife Fund International. "The hardest issues are still on the table."

"Polluters won, people lost," said Greenpeace International's executive director Kumi Naidoo in a statement. Naidoo criticised the fact that the next treaty on climate change matters would only be implemented in 2020. "Right now the global climate regime amounts to nothing more than a voluntary deal that’s put off for a decade."

Greenpeace borrowed a page from the fable The Fox and the Grapes, which is attributed to the ancient Greek writer Aesop where the fox isn't able to reach the grapes and declares them to be sour. Seeing the writing on the wall, Greenpeace role played the sour grapes script.

Greenpeace activists dressed up in expensive business clothes to pose as big corporations - who they feel will benefit from delays in climate talks. They walked down the street, across the road from the United Nations precinct, holding up placards reading "Business as Usual". Wearing name tags of major companies, such as Eskom, Shell and Koch - they pretended to be executives, celebrating a weak environmental deal in Durban.

"Thank you Durban," the said sarcastically, popping bottles of champagne.

"The only people who will be celebrating what's happening in Durban, will be big corporations," said Greenpeace head, Kumi Naidoo.

On Friday, Naidoo led a protest inside the ICC to pressure country leaders inside negotiations to push for an ambitious deal to cut down on emissions that are causing global warming. 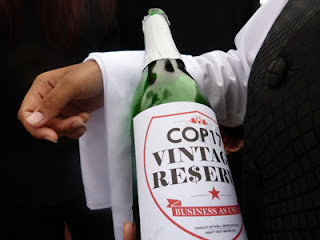 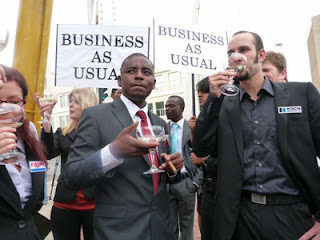 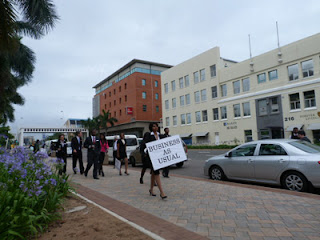 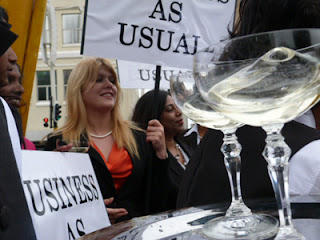