In May this year, Oxfam published their new report “Growing Better Future" and five months later ActionAid, their “On the Brink” report. Their key message was one and the same: We are hurling towards mass starvation on account of the synergistic impact of accelerating climate change; degradation of natural resources and untameable food price inflation in an over-populated planet. In the process, these NGOs elevated Malthus's reputation as a prognosticator to the Delphic levels of a Nostradamus.

This is Part 4 of this article deals with the attempt  of Western countries to finance such a programme by a Global Green Fund and carbon market at the on-going Climate Summit at Durban. However a huge section of African NGOs are  so upset about this funding linked to carbon trading that they signed an open letter to the leaders not to adopt this programme. Part I is the introduction. NGOs have changed the labels of their hysteria - from Global Warming to Global Hunger with the philosophical underpinnings of their programmes unchanged.  Part II of the paper that critique the claim that “climate change” being responsible for high food prices and global hunger and concludes that at best these claims are  based on shoddy research and at worst cloaks a Machiavellian agenda. Part III explains how Climate Smart Agriculture and Renewable Energy furthers the eco-imperialistic agenda. 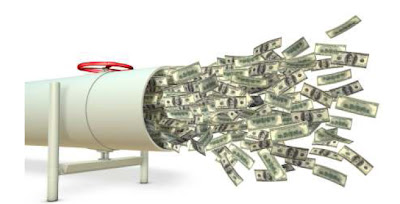 Though both ActionAid and Oxfam project their respective reports as based on new in-house reports, the content is just a rehash of those found in the FAO report Food Security and Agricultural Mitigation in Developing Countries: Options for Capturing Synergies published in October 2009. This FAO Report in particular was cited extensively by Oxfam and so are many of their graphs and data.

The FAO report gives details of strategy of raising funds running into over tens of trillion dollars for a 40 year programme. It is apparent that the attempt was to use a combination of a Climate Green Fund and carbon markets to finance the scheme. Read more: www.fao.org/docrep/012/i1318e/i1318e00.pdf

On the eve of the Durban Climate Meet, a concerted effort to actualize this financing mechanism  gained momentum. A World Bank and SIDA-supported pilot project in Kenya is being used to convince governments that this is a workable solution for agriculture investment. This precipitated a vertical split within the ranks of NGOs with ActionAid, thankfully breaking away and leading the revolt and the formation of a formidable NGO alliance called No Soil Carbon Market challenging this move.  This alliance wrote to all African leaders to resist this eco-imperialism. We reproduce the letter as found in their blog: 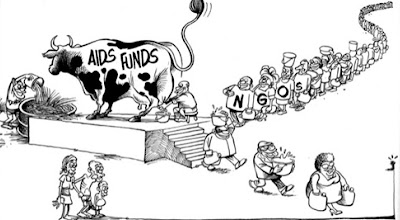 We, the undersigned civil society organisations from Africa and around the world, strongly object to a decision in Durban for an agriculture work programme focused on mitigation, which would lead to agricultural soils and agroecological practices being turned into commodities to be sold on carbon markets, or used as sinks to enable industrialised countries to continue to avoid reducing emissions.

African ministers have been urged by the World Bank to endorse this approach, coined as “climate smart” agriculture. Yet legitimizing soil carbon offsets through a mitigation-based agriculture work programme will further destabilize the climate, fail to tackle the real causes of agriculture emissions, present a major distraction from the need to generate public finance, and exacerbate social injustice by shifting the burden of mitigation onto developing countries – especially their small producers. Soil carbon offsets also have the potential to drive a new speculative land grab, further undermining food sovereignty and the right to food.

At the Durban COP17 negotiations, African and other developing country leaders must:

1) Reject soil carbon markets and an agriculture work programme that is framed within discussions on mitigation.
2) Demand that Annex 1 countries show political will and honour their legal obligations to new and additional finance to developing countries, for example with direct, annual contributions to the Adaptation Fund, instead of wasting public finances on propping up carbon markets that are doomed to fail.
3) Demand innovative sources of finance such as a Financial Transaction Tax (to draw a tiny percentage from international financial transactions) or use of Special Drawing Rights (SDRs, issued by the International Monetary Fund). These could generate billions of dollars for developing countries to address adaptation challenges in Africa and elsewhere.

• The difficulty in measuring carbon sequestered in soil means that numbers must be largely based on assumptions instead of being scientifically verified. The complication and high cost of developing systems for the monitoring, reporting and verification (MRV) of soil carbon will chiefly benefit carbon consultants and companies in North America and Europe – and not the smallholder farmers and herders in Africa and elsewhere. Creating the complex infrastructure for soil carbon mechanisms is an expensive and dangerous diversion from directly financing the well-documented adaptation needs of small-scale agriculture.
• Corporations, governments and industrial agricultural production systems in Annex 1 countries are allowed to continue emitting greenhouse gases while supposedly meeting their mitigation targets through offsets. This reliance on offsets not only shifts the responsibility for addressing climate change onto developing country governments and small producers, but also distracts from the priority of addressing the serious adaptation challenges resulting from climate change.
• COP17 approval of such a work programme could pave the way for costly and unproven technological fixes such as genetically modified organisms (GMOs) and other patented technologies and practices as solutions for “climate smart” agriculture. These technologies are not only prohibitively costly for developing countries, but also create new forms of corporate control over agricultural plant and animal genetic resources. Their safety is in doubt, and environmental, social and economic harm has already occurred from their use. They threaten to hinder rather than enhance agricultural adaptation to climate change.

• Carbon markets are an over-hyped, unreliable, volatile and inequitable source of funding for Africa. In spite of the vast volumes of money currently associated with carbon markets, only a tiny fraction of this goes to projects on the ground. In 2009, out of a total global carbon market volume of $144 billion, just 0.2% of this was for project-based transactions . The remaining 99.8% was captured by large consultants’ fees and profits for commodity speculators, who trade carbon on international commodity markets like any other financialised product.
• Communities and governments’ public funds are expected to bear the huge implementation and pre-financing costs of projects. The implementation costs of land management methods are many times higher than the returns from the carbon market, while, to judge by Kenya’s pilot soil carbon market project, half of the projected returns are needed to cover transaction costs such as administration. The financial returns from offsets will barely trickle down to farmers, if at all. Such projects are therefore either financially unviable, or will continue to need public funding to survive.
• Carbon markets suffer from structural weaknesses that make them highly susceptible to fraud and manipulation, thereby making them unreliable for climate finance and development planning.
• The global price of carbon is already too low and volatile to deliver reliable finance to projects. Analysts predict that with commodity markets facing turmoil, and carbon markets facing a likely flood of new offset products, the price of carbon will only go down. This makes them a disastrous solution for food sovereignty, improved rural livelihoods and the agriculture adaptation needs of small producers.
• Given the technical challenges and scientific uncertainties about the actual sequestration of carbon in soil, this makes for a poor “tradable asset”. Given these uncertainties, soil carbon offset credits are ineligible for the European Emissions Trading Scheme – representing 97% of the global compliance market – until at least 2020.

Soil carbon and other agriculture offsets will not bring adequate, predictable, additional or reliable finance for adaptation or mitigation in Africa and elsewhere. Instead these quasi-markets will require massive public funds for pre-financing, and serve mostly to generate profits for commodity speculators in the North.

The focus on carbon markets also provides a distraction from urgent conversations on how to generate public finance to help developing countries to confront climate change. In 2009, developed countries committed to generate $100 billion per year for adaptation and mitigation in developing countries from public and private sources. To date, political energy has mostly focused attention on ways to generate and leverage private finance – usually by using public funds to prop up failing carbon markets. At the same time, developed countries have largely ignored the potential of numerous approaches that could be used to generate public finance (such as a tiny tax on financial transactions, or levies in the shipping and aviation sectors) which could go in part to support smallholder farmers and agricultural systems in developing countries.

The Kenya Project on Agricultural Carbon is not replicable without public funds:

The World Bank and SIDA-supported pilot project in Kenya is being used to convince African governments that this is a workable solution for agriculture investment. Yet even the project proponents admit that farmers will not benefit from carbon payments: they are only likely to earn between $5 and $1 per year. The World Bank has bankrolled the payment of carbon consultants to develop a “simplified” carbon methodology with the intent to duplicate it elsewhere, while SIDA funding is making up the difference. The project suffers from high transaction costs (up to half of the estimated revenue), low returns to farmers and uncertain environmental benefits due to the problems with soil carbon measurement. Without the World Bank’s support of guaranteed minimum carbon price and SIDA’s pre-financing, the huge required investment and low returns mean that this model is not replicable for other African countries.

We believe that agroecological practices are a key strategy for adaptation, mitigation and increased yields for African farmers. But these approaches cannot come packaged with, or be structured for, carbon offset credits. The critical issues of agriculture, food security and climate change have in fact been assessed at length in the International Assessment of Agricultural Knowledge, Science and Technology for Development (IAASTD). Ministers should consider whether IAASTD policy options on climate change and food security, approved by more than 50 governments in Johannesburg in April 2008, are suitable for adoption in their countries. The UN Committee on World Food Security (CFS) is also charged with addressing the linkages of climate change and food security in the coming year. The CFS process is inclusive and allows space for genuine civil society input.

Posted by Rajan Alexander at 2:20 PM