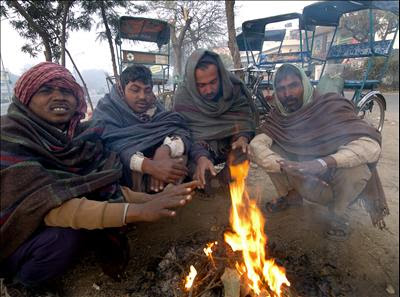 During the Durban Climate meet, the World Meteorological Organization (WMO) circulated a paper that despite a strong La Niña, winter was mild this year.  This is a bundle of lies but was picked up by warmist media such as Down to Earth and the lies re-circulated. There are three major differences between the last winter and this year.

Firstly, last year’s winter was conditioned by a large so-called blocking high in North Atlantic that led to the polar outbreaks into Europe where the cold air went, making it warmer in behind. Coincidentally pressures have been much above normal in the far North Pacific, and that is typical with a strong La Nina. The pressures were high enough to make the main branch of Westerlies active to the south and led to the pineapple express and heavy rains in California.

[Pineapple Express - atmospheric river, which is a more general term for such narrow corridors of enhanced water vapor transport at mid-latitudes around the world.] 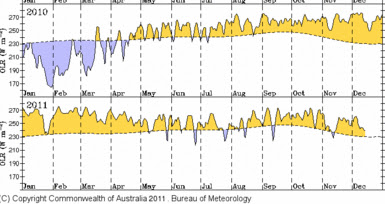 So the very cold winter of 2010-2011 was caused by the combination of a very strong La Niña and a forcing of the atmosphere by the anomalous atmospheric heating patterns linked to SSTs [sea surface temperatures]. In the case of a multi-year La Niña, its first phase tends to be the strongest and its subsequent phases are usually found decreasing in strength. This evident from the above graph that illustrates cloudiness is relatively not as intense as last year.

[Cloudiness along the equator, near the dateline, is an important indicator of ENSO conditions, as it typically increases (negative OLR anomalies) near and to the east of the Date Line during an El Niño event and decreases (positive OLR anomalies) during a La Niña event].

Accordingly, 2011-2012 La Niña should be much weaker than its first phase 2010-2011. This may also explain why we have not come across the blocking high in North Atlantic this year unlike last year.

Secondly last year La Niña was waning as we headed into winter and this year La Nina is strengthening as we head into winter. Last year, in contrast we saw brutal snow early in the season and then petered off by January as the La Niña started waning. This year we can expect the reverse - a mild start but accelerating cold as we go deeper into the winter season.

"Currently, La Niña is not as strong as it was in September 2010. Roughly one- half of the models predict La Niña to strengthen during the Northern Hemisphere fall and winter. Of these models, the majority predict a weak La Niña (3-month average in the Nino-3.4 region less than -0.9°C). In addition, a weaker second La Niña winter has occurred in three of the five multi-year La Niñas in the historical SST record since 1950.

However, the NCEP Climate Forecast System (CFS.v1) predicts a moderate-strength La Niña this winter (between -1.0°C to -1.4°C) and CFS.v2 predicts a strong La Niña (more than -1.5°C), which rivals last year's peak strength. For CFS forecasts made at this time of year, the average error for December-February is roughly ±0.5°C, so there is uncertainty as to whether this amplitude will be achieved. Thus, at this time, a weak or moderate strength La Niña is most likely during the Northern Hemisphere winter."

Klaus Wolter, a meteorologist with NOAA, looked into La Niñas since 1900.  He found 10 La Niñas of 2 years.  Four of them (40%) stayed La Nina for a 3rd year, and six flipped to El Niño.  None went back to neutral and stayed there. So there exists only a 40% chance that  we can get a third year running La Niña while a higher 60% chance of an El Niño - which should make global warmists very happy. So what will it be? Historic data suggests that higher the intensity of the second year La Niña, the more probable it running for a third year. The present La Niña key indicator values as ending for last week are as follows:

It is interesting that CFS version 1 and 2 suggests ambiguity - with version 1 forecasting a moderate La Niña while their version 2 suggests a stronger one. So which one is right is very difficult to tell as latest two major La Niña indices give widely differing  indications -  Niño3.4  indicate moderate strength while SOI indicating a much stronger intensity. By the month end or first week of January 2012 we should be getting a better idea on the strength of phase II of the current La Niña. 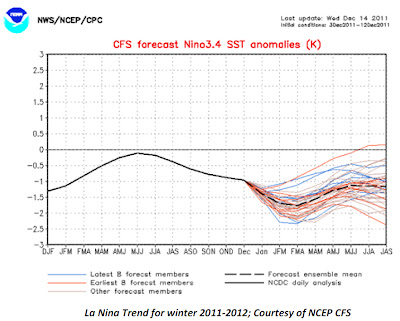 As seen further in  the latest NCEP-NOAA-CFC La Niña forecast graph the La Niña is shown strengthening from this month ( December), peaking sometime around March next year. Interestingly, almost all model predictions, except one, predict Niño3.4 SST anomalies to be within negative territory, well into September 2012 and beyond (?). Further, a July 2009 paper by McLean, de Freitas and Carter showed that global average temperatures followed the Southern Oscillation Index (El Nino/La Nina) with a 5-8 months lag. Accordingly, there is a very high likelihood that 2012 would go down as one of the coldest in recorded history, with the winter of 2012, possibly the harshest experienced in recent times.  What is however clear is that 2012 summer will be a very mild one.

So why the mild start to winter?


This brings to the third difference. No two La Niñas are the same. There are several "wild card” meteorologists look out for in La Niña patterns that makes them different from each other. Seasonal forecasters keep track of multiple regional atmospheric "oscillations" around the globe. These shifts in temperatures and pressure systems around the earth can signal trends for seasonal forecasts. The Pacific Decadal Oscillation (PDO), the Arctic Oscillation (AO) and North Atlantic Oscillation (NAO) each represent different regions and time scales as the names suggest.

The PDO remains negative together with the Eastern Pacific Oscillation (EPO) and La Niña means  that the Pacific is running cooler than last year at this point and remains that way for whole of winter. That leaves the Atlantic where the Arctic Oscillation (AO) and North Atlantic Oscillation (NAO) indices were running positive in the last several weeks which should explain the milder start to winter. It has to be kept in mind that both the AO and NAO were negative last winter.  So it is not a surprise that NOAA's winter outlook specifically cites the AO as a major "wild card" in this winter's outlook.

"For the second winter in a row, La Niña will influence weather patterns across the country, but as usual, it's not the only climate factor at play. The 'wild card' is the lesser-known and less predictable Arctic Oscillation that could produce dramatic short-term swings in temperatures this winter.

"The evolving La Niña will shape this winter," said Mike Halpert, deputy director of NOAA's Climate Prediction Center. "There is a wild card, though. The erratic Arctic Oscillation can generate strong shifts in the climate patterns that could overwhelm or amplify La Niña's typical impacts.

Both the AO and NAO are positive but expected to flip by end of this month or early January. Because the fluctuations of  these two phenomena are difficult to predict, this leaves two basic kinds of winter forecasts - the first of a winter with high variability where the AO and NAO switches several time between mildly positive and negative phases leading to a mild winter interspersed with cold spells and the second, one of a prolonged cold winter spell. 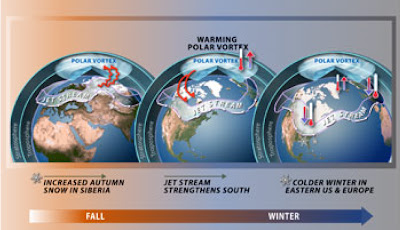 Ironically many forecasts in both categories bases the assumption on a new index, called the Snow Advance Index (SAI) that predicts the phase of the coming winter’s Arctic Oscillation (AO), based on the growth of Siberia’s October snow cover. This index was formulated by Dr. Judah Cohen, the principal scientist at Atmospheric and Environmental Research. Cohen claimed that

“the AO, while thought to be unpredictable, may in fact be one of the most easily predicted the phenomenon known in the climate system.”

Historically, he reports, the index has explained “close to 75%” of the AO variability. Cohen’s system possesses a high success rate in their prediction of winters.

So the differences in most winter prediction boils down to what the Siberian snow cover was by October end. The first category says it was normal but not accompanied with a dramatic snow pack expansion and others who are of the view that the snow pack had seen a dramatic expansion. Satellite images do not give a confirmation one way or other. So what does Cohen himself feel? In forecasting the winter of the East of the US he observed:

“I feel that the snow-atmosphere coupling this fall continues to favour a milder winter in the East. I think the winter starts off overall mild in the East and the better chance of more persistent cold is later in the winter.”

So Cohen places his bet on an accelerating colder winter. With an inconclusive Siberian snow extent, he probably more relied on factors other than the AO such as a progressive intensification of the La Niña.

Posted by Rajan Alexander at 3:08 PM