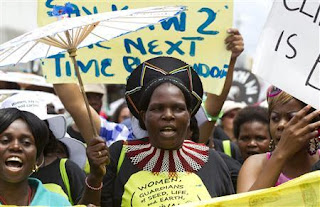 The world's three biggest polluters China, the United States and India refused to move toward a new legal commitment to curb their carbon emissions Tuesday, increasing the risk that climate talks will fail to clinch a meaningful deal this week.

The European Union is leading efforts to keep alive the Kyoto Protocol, the world's only legal pact to tackle climate change, with a conditional promise to sign a global deal that would force big emitters to change their ways.

But with the planet's biggest polluters digging in their heels, U.N. Secretary General Ban Ki Moon acknowledged the almost 200 nations meeting in the South African coastal city of Durban could struggle to strike a deal backed by legal force.

"A legally-binding comprehensive agreement may not be possible in Durban," U.N. Secretary General Ban Ki-moon told the talks. "But this will have to be our priority."

The European Union is pressing for a pact by 2015 which would update Kyoto to reflect the emergence of developing countries such as China as big carbon emitters and impose cuts on them.

A vital clause in the pact which enforces binding cuts on rich nations expires at the end of 2012, but all parties have agreed there is not time to negotiate a complex global deal by then.

"The European Union would like to see things concluded as early as possible," EU Climate Commissioner Connie Hedegaard told reporters when asked if it would accept a date late than 2015. "We want a legally binding deal. We have really good reasons to want that," she said.

Although the first phase of the Kyoto Protocol expires at the end of next year, the European Union wants a deal agreed by 2015 that would take effect no later than 2020. Scientists say greenhouse gas emissions need to peak and start falling by 2020 to avoid devastating effects, such as island countries being submerged and agricultural crops failing.


The European Union's condition for signing a deal is that other heavy polluters agree to a road map under which they would commit, at some stage, to binding reductions. Without that, the bloc says, there would be no meaningful progress for the planet as the European Union accounts for only 11 percent of all emissions. China, the United States and India together make up nearly half of the world's CO2 emissions and they all have reasons for not wanting to be part of a new global deal. The trio want to put off any commitment on binding cuts until 2015. That would be after publication of a scientific review of the effects of climate change and work to measure the effectiveness of emissions pledges by individual countries. Although China has moved toward domestic targets for cutting carbon, Beijing says it is not to blame for previous generations of industrial pollution and cannot allow its fast-developing economy to be shackled by the drive to cut carbon emissions. Beijing gave positive signals last week that it was prepared to contemplate some form of binding targets but has since consistently refused to be pinned down on what China is prepared to accept and by what date. The country's lead negotiator Xie Zhenhua told reporters China might be part of a deal if, after 2020, global efforts were in line with "common but differentiated responsibilities." That wording, lifted from the Kyoto Protocol, places a heavier burden on rich nations for reducing pollution than poorer nations, who have historically been less responsible for the emissions that are changing the planet's climate. However, the world economy has moved on significantly since the adoption of the Kyoto Protocol in 1997. Developed nations are bound by its terms but developing nations are not -- including China, now the world's top carbon polluter. For its part, the United States is held back by domestic politics at least until after a presidential election next year as Republicans and President Barack Obama's Democrats squabble over every attempt to pass environment legislation.

"We would be quite open to a discussion about a process that would lead to a negotiation for the thing, whatever it turns out to be, that follows 2020, and we are also fully willing to recognize that that might be a legal agreement," U.S. climate envoy Todd Stern said.

India says it is a late-comer to industrial development and its economy lags China, making it reluctant to accept binding targets that could curb its growth.

"We believe strongly that we should consider the need of a further legal agreement (...) after assessing the actions of all under the 2015 review and look at the science," Jayanthi Natarajan, India's environment minister, said.

The EU's Hedegaard said she was holding bilateral meetings with all parties, not just the big emitters, in an effort to increase pressure for a solution.

Even without a deal by the end of this week, the United Nations Framework Convention on Climate Change and the Kyoto Protocol will still exist, but would not enforce carbon cuts. Important agreements would remain in place which enable the monitoring and verification of carbon emissions, which provide practical data that could help form the basis of a future deal.

Posted by Rajan Alexander at 1:13 AM