Durban Summit agree to reach agreement by 2015 for concrete steps to be taken only after 2020! 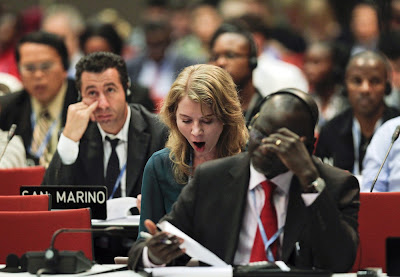 The joy of we climate sceptics find knows no bounds. After two weeks and over time of 24 hours,  all that the Durban Climate circus managed to produce as an outcome was a road map towards an accord to be signed by 2015 whose proposed actions will be operational from 2020! The process for doing so, called

the Durban Platform for Enhanced Action, would develop a new protocol, another legal instrument or agreed outcome with legal force that will be applicable to all Parties to the UN climate convention," under a working group. The exact nature of what "legal instrument" or "agreed outcome" has not yet been decided!

The Durban talks made headway on agreeing the design of Green Climate Fund to channel up to $100 billion a year by 2020 to poorer nations, but achieved little on establishing where the money will come from to fill it. The only mechanism that remains a viable form of finance for this Fund is the Kyoto Protocol and the related carbon trading market mechanism. With the collapse of the world's largest carbon market, Chicago Carbon Exchange, this leaves only the Australian and European carbon markets to sustain the financing of the fund.

The problem here is that the durability of the Australian carbon market is in doubt  with Julia Gillard and her Labour Party expected to be completely washed out in the next elections expected sometime in 2013. The centre-right Liberal Party who is expected to catapult back in power promises to revoke the country's cap & trade act along with it, Australia's fledgling carbon market!

Against the backdrop of a sovereign debt crisis, developed nations are also ill-placed to commit money beyond short-term financing that runs out at the end of next year. Oxfam who was spear heading the effort to widen the financing basket of the fund suffered a double whammy at the summit .

Their efforts to tax the bunkers (maritime and aviation industries) and introduce a carbon trading programme for the so called Climate Smart Agriculture bit the dust at the summit but not before spending millions of euros on these campaigns. A proposal last week to generate cash from charging international shipping for the carbon emissions generated fierce opposition and consequently  it did not survive in the final text. The proposal for carbon trading of the agriculture didn't even make it in the preliminary text.

The deal extends Kyoto, whose first phase of emissions cuts run from 2008 to the end of 2012. The second commitment period will run from Jan. 1 2013 until the end of 2017. There was an agreement on extending Kyoto for five years, but lawyers are going to have to work out how to align this with existing EU legislation. The US is still out of the Protocol. So Kyoto's survival is still in doubt. Canada is likely to withdraw in the next year. Japan and Russia aren't likely to sign up to a new Kyoto emissions reduction round. Keeping Kyoto alive is a strategic move to use it as a 2012 bargaining chip to pressure developing countries to stay in the negotiating tent. By next year, this bargaining chip too is most likely to be gone!

NGOs had often campaigned with the catchy slogan "Time is Running" (to act!). The key message from Durban is that there is no urgency to act. This is really where we skeptics feel vindicated. A four year postponement to a climate treaty also raises the question whether the climate alarmism movement can survive during the interim.

They face two main threats. The first is from the US presidential elections next year where Obama is expected to be booted out and a Republican Party's rightist pressure group the Tea Party candidate takes his place. The Republicans additionally is expected hold control of both the Senate and Congress from 2013. The Tea Party among other things are climate sceptics and this does not augur well for any future negotiation of a global climate treaty. 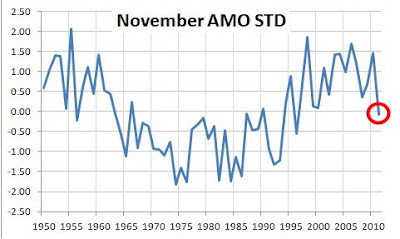 The second threat comes from the climate itself. Unless observational data can confirm accelerating rise in global temperatures, the whole scientific justification of entering into a global climate treaty would be in doubt. This does not seem likely as we have entered the cooling mode. 13 years have passed without global temperatures surpassing the high of 1998. And in another two years, the IPCC, by their own procedure, will have to admit the empirical falsification, disproving the hypothesis on the dominant influence of CO2 and alleged associated effects on the global temperature.

It looks as if all natural cyclic climatic factors are confluencing together that portends to a cooling world for the next 25-30 years,. Prominent among these factors is the Pacific Decadal Oscillation (PDO) which  turned negative a few years ago. Last month, the Atlantic Multidecadal Oscillation (AMO) Index also went negative. Though it maybe a blip, it still signals that its downward cycle has started. For the Northern Hemisphere, the AMO index is tightly correlated to air temperatures and rainfall over much of the Northern Hemisphere, in particular, North America and Europe such as North Eastern Brazilian and African Sahel rainfall and North American and European summer climate. It is also associated with changes in the frequency of North American droughts and is reflected in the frequency of severe Atlantic hurricanes. Even a neutral AMO in the presence of a negative PDO portends considerable cooling for the Northern Hemisphere. Then again 2015 coincides with NASA's prediction of complete sunspot disappearance known as Maunder Minimum that ushers in the Little Ice Age! In an increasing cooling world, it would be difficult for world leaders to justify a climate treaty.

The intellectual Roman Emperor Marcus Aurelius (AD 121-180) said: "The object in life is not to be on the side of the majority, but to escape finding oneself in the ranks of the insane."

From a review of the debacle at Durban, NGOs like Oxfam will do well to appreciate the Aurelius' nugget of wisdom. The time has come for them to take stock what damage this climate lunacy did to their image as a champion of the poor and the developing countries. It is remarkable that Oxfam thinks it can get away with the contradictory policies - encouraging forestry expansion, in the process reducing the amount of land devoted to food-producing agriculture and then crying crocodile tears on rising global hunger. It is time to put to an end to this shameful chapter of NGO history and do what we are best endowed to do - remove poverty and development instead of creating it!

Failure to do so will as friend Gopal Panicker says will prompt knicknames like "OX doth feed on the FAMished!

Posted by Rajan Alexander at 3:40 PM