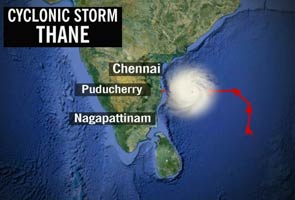 Owners of more than 100 mechanised fishing trawlers that sailed from the Kasimedu Fishing Harbour five days ago and now stranded near the Nizampatnam Bay in Andhra Pradesh, have appealed to the Tamil Nadu government and the Indian Coast Guard (Eastern Region) to rescue their boats and 700-odd men onboard, before the arrival of Cyclone Thane.

"We have received reports that about 100 mechanised boats from Kasimedu are now stranded near Nizampatnam Bay area due to rough sea conditions and we appealed to the Coast Guard to act swiftly to move them to a safer locations before cyclonic storm Thane reaches the area."

When the meteorological department alerted fishermen about the storm a few days ago, various boat owner associations radioed the weather warning message to all trawlers that left for fishing about five days ago.

"Though half of the trawlers moved towards safer areas near Krishnapatnam Port and nearby areas, we did not receive any communication from about 100 boats and we suspect that they might be stranded near Nizampatnam Bay due to the prevailing rough sea conditions," M E Raghupathy, president of Chennai-Tiruvallur-Kanchipuram District Mechanised Boat Fishermen Association told Express.

According to boat owners, about 700 fishermen are stranded in these 100-odd mechanised trawlers.

Meanwhile, fishing activities from Chennai, Tiruvallur and Kanchipuram have come to a standstill after weathermen cautioned fishermen from venturing into sea.

K Bharathi, president of the South Indian Fishermen Welfare Association (SIFWA), told Express that about 10,000 fibre boats from these three districts were moved to safer locations in all fishing hamlets.

"Fishermen even in catamarans did not venture into sea for the last two days due to rough sea conditions," Bharathi added.

CUDDALORE: Thirty coconut trees were uprooted due to soil erosion in the coastal area of Thazanguda in Cuddalore on Wednesday. Due to the imminent cyclone, continuous strong waves had been eroding the soil. As a result, the trees fell. Rough sea and heavy waves were also caused havoc in the coastal hamlets and many fishermen said during high tide, water entered their villages.

The eighth level cyclone warning was issued at Cuddalore port late on Wednesday. Boats had been docked at the fishing port for the fourth consecutive day.Port office source said heavy rains were expected from Thursday and the cyclone would cross Cuddalore and Nellore on Friday morning. Fisheries department had issued warning to fishing hamlets asking them to be on alert.

Meanwhile, the coastline near Puducherry also experienced heavy wind and strong waves that lashed the shores.