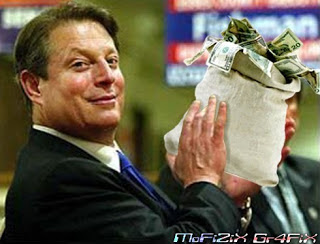 
“We can’t wait. . . . We have a planetary emergency,” the former vice president told industry leaders and scientists at the 2008 conference. “Here are just a few of the investments that I personally think make sense.”

Today, several of those clean tech firms are thriving, including a solar energy start-up and a Spanish utility company that has dotted rural America with hundreds of wind turbines.

Al Gore is thriving, too.

The man who was within sight of the presidency 12 years ago has transformed himself, becoming perhaps the world’s most renowned crusader on climate change and a highly successful green-tech investor.

Just before leaving public office in 2001, Gore reported assets of less than $2 million; today, his wealth is estimated at $100 million.

Gore charted this path by returning to his longtime passion — clean energy. He benefited from a powerful resume and a constellation of friends in the investment world and in Washington. And four years ago, his portfolio aligned smoothly with the agenda of an incoming administration and its plan to spend billions in stimulus funds on alternative energy.

The recovering politician was pushing the right cause at the perfect time.

Fourteen green-tech firms in which Gore invested received or directly benefited from more than $2.5 billion in loans, grants and tax breaks, part of President Obama’s historic push to seed a U.S. renewable-energy industry with public money.

Over the course of his metamorphosis, Gore became an environmentalist hero with release of his award-winning film and book warning of carbon emissions dangerously overheating the planet. He founded an investment firm devoted in part to backing green-minded companies and later partnered with a leading venture capital firm to invest in clean energy start-ups.


“We have work to do!” Gore recently exhorted an audience while showing his trademark slide show about melting polar ice caps and the urgent need to stop burning so much oil and gas.

That declaration, his friends say, captures his obsession — he’s unable to rest in his self-appointed mission to save the planet.

“Maybe there’s someone as knowledgeable and passionate about climate change. I just haven’t met that person,”

said Orin Kramer, a leading New York hedge fund manager, friend of Gore and top Democratic campaign bundler. “His schedule is intensely busy, and my sense is he lives a life that profoundly reflects his values and passions.”

In building his new career, Gore’s name has become ensnared in a broader criticism from Republicans, who put him among political allies they say the Obama administration has unjustly enriched with stimulus and clean-energy funding.

ore declined to be interviewed, but spokeswoman Betsy McManus said he had not asked the administration for support for any companies in which he had invested.


“For almost 40 years, he has consistently advocated for the rapid deployment of renewable energy and other sustainability technologies,” she said. “His investments are consistent with his beliefs.”


“These are merit-based decisions made by professionals with the relevant policy expertise,”

White House spokesman Eric Schultz said. One of the rare times Gore addressed the questions, at a congressional hearing in 2009, Republicans had suggested that Obama’s agenda appeared destined to help him become the nation’s first “carbon billionaire.”

Gore bristled when Rep. Marsha Blackburn (R-Tenn.) asked if he stood to profit from his investments and political connections.


“I believe that the transition to a green economy is good for our economy and good for all of us, and I have invested in it,” he said. “And, congresswoman, if you believe that the reason I have been working on this issue for 30 years is because of greed, you don’t know me.”

Gore, 63, divides most of his time now between his home in Nashville and a St. Regis tower apartment in San Francisco, where he can visit his West Coast investment partnership and see his new girlfriend, an environmental activist. (He and his wife of 40 years, Tipper, separated two years ago. She lives in the $8.9 million mansion they bought in 2010 outside Santa Barbara.)

His schedule includes international travel as well, often delivering speeches for fees that have reached as high as $175,000.

It is a huge shift from a decade ago, when Gore was considered a Washington lifer. The Tennessean was largely raised in the nation’s capital as the son of a U.S. senator. As his father had hoped, Albert Arnold Gore Jr. went on to serve in office for 24 years: 16 years in Congress and eight as vice president under President Bill Clinton.

His loss to George W. Bush in 2000 was personally devastating, and Gore went into a kind of mourning, friends say.

“The way he coped with the 2000 disaster was to throw himself into this new work,” said Elaine Kamarck, a former Clinton aide and friend of Gore who was chief policy adviser on his 2000 campaign.


“He just didn’t lick his wounds and go away.”

Gore eventually turned the painful experience into a punchline. He didn’t miss a beat when a conference organizer in 2008 confessed it “hurts” to think of the environmental agenda that could have been, if only Gore had won.

Posted by Rajan Alexander at 1:35 PM