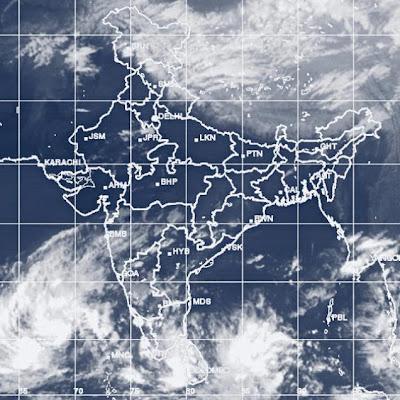 (Hindu Businessline) A weather-creating low-pressure area has sprung up over the south-east Arabian Sea and is bringing considerable amounts of rain over south peninsula.

Easterly winds are seen pushing the systems farther into the Arabian Sea; the India Meteorological Department (IMD) expected it intensify a round soon.

Easterly winds dragged in by the system would bring heavy to very heavy rainfall over Lakshadweep on Tuesday.

Heavy rainfall has been forecast at one or two places over Tamil Nadu and Kerala as well.

The Bay of Bengal is also getting into action with heavy rainfall expected to break out over Andaman and Nicobar Islands on Tuesday and Wednesday.

This will be heralded by a low-pressure area expected to form over South Andaman Sea by Wednesday.

The IMD has joined the outlook for intensification of the system in the Bay and its further movement in the west-north-west direction.

A few global models expect it to become a storm and head for a landfall over the east coast, although they differ on the choice of the likely target for a specific spot.

The US National Centres for Environmental Prediction suggests the Andhra Pradesh coast as the likely landfall spot.

The European Centre for Medium-Range Weather Forecasts was less optimistic and suggested that the system could weaken as it approached the Tamil Nadu coast.

Interestingly, the US Naval forecasts saw one more storm developing during this phase — just off Kanyakumari around Saturday and digging north into south-east Arabian Sea.

Posted by Rajan Alexander at 9:58 AM