In last 2 hrs pressure deepened to 989mb and wind speed is now upto 80km/hr. The IMD expects wind speed to increase past 100 km/hr before it makes landfall. 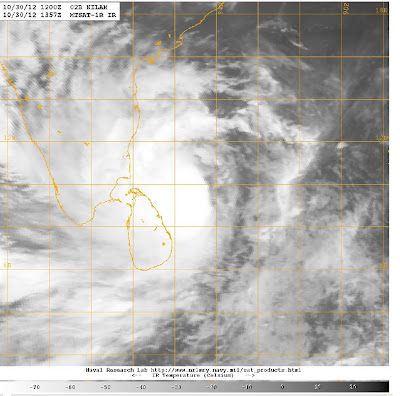 (Hindu Businessline) The US Navy’s Joint Typhoon Warning Centre expects Cyclone Nilam in the south-west Bay of Bengal to gradually intensify another round ahead of a landfall expected on Wednesday afternoon.


After this, the friction effects of land will bring down storm intensity, but not before generating heavy to very heavy rainfall over the coastal areas of Tamil Nadu and Andhra Pradesh.

‘Nilam’ is expected to track north-west from its current being where it is quasi-stationery (briefly stopped on tracks), JTWC said. The India Meteorological Department (IMD) too expects the same track for the cyclonic storm.

The European Centre for Medium-Range Weather Forecasts also tends to agree with the forecast for another round of intensification and the north westward track for ‘Nilam’.

But the US National Centre for Environmental Prediction persists with the odd forecast that takes ‘Nilam’ for landfall over north-east Sri Lanka and adjoining south-east Tamil Nadu coast.

Subsequently, it breaks up into two, with a splinter propelling towards Chennai and the other towards coastal Karnataka-Konkan.

The IMD has warned of heavy to very heavy rainfall with extremely heavy falls (25 cm or more) at one or two places over north coastal Tamil Nadu and south coastal Andhra Pradesh during the next two days.

Squally winds speed reaching 45-55 km/hr gusting to 65 km/h would prevail along and off north Tamil Nadu, Puducherry and adjoining south Andhra Pradesh coasts until Wednesday noon. The wind speed would gradually increase, thereafter, as the system comes closer to coast.

Sea conditions will be very rough to high along and off north Tamil Nadu, Puducherry and adjoining south Andhra Pradesh coasts.

Fishermen along north Tamil Nadu, Puducherry and adjoining south Andhra Pradesh coasts have been advised not to venture in to the sea.

Posted by Rajan Alexander at 9:04 PM