Cyclone to skirt Chennai tomorrow and make landfall near South Andhra on Wednesday? 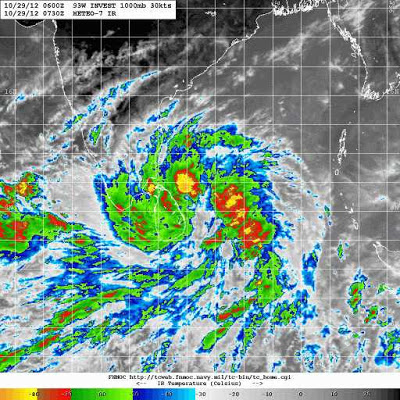 (Bay of Bengal0 BB-10, depression, and getting deep, is now at 9.6N   83.7E, almost stationary since our last report ( Yesterday, below), as a depression at 1000 mb and getting deep. Just East off the Northern tip of Sri Lanka, it will move along the projected track and hit Central regions of Coastal TN, near,  Sivaganga and Ramanathpuram,  as a deep Depression.

Coastal regions of TN will be gusty with 35-40 knots winds and Chennai as expected strong NE winds.

Peak of the precipitation will be in central TN with some places getting upto 12-15 cms and maybe 18 cms in the odd place. 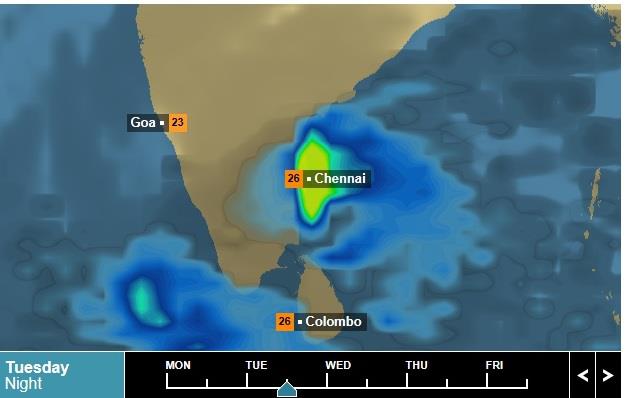 (Times of India) After a week's break, the Met department has said that the rains are back and could last the whole week. A trough of low pressure over eastern parts of the Bay of Bengal has developed into a 'well-marked depression' over the Andaman and Nicobar Islands.

"There is intense clouding over the ocean and our models show that it will move towards Tamil Nadu,"

"There could be intense rainfall for the next three to four days, and there could be showers till the end of the week."

The Meteorological department has been observing the formation of the system for a week.

"We will have to wait and see before declaring it a depression. We have not sent warnings to the fishing community as the centre of the system is not yet clear,"

"Parts of the Cauvery delta region, especially Thanjavur and Tiruvarur districts, have reported rain," he said.

"Going by the history and the current situation, we are poised for good rainfall," said Raj.

Chennai, in its first week of the monsoon, received 186% excess rainfall. The onset of monsoon was declared on October 19, after which Chennai has received 244.2mm of rain. The normal is 85.3mm. Chennai gets about 28cm of rain over 10 days in October and 40cm over 12 days in November. Raj said that in the last five years, the number of cyclonic storms has come down.

"They have been replaced by deep depressions," he said.

Posted by Rajan Alexander at 9:15 AM