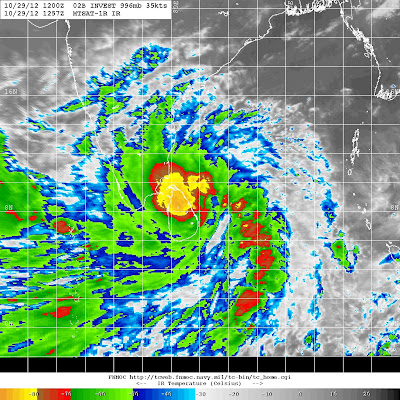 (Hindu Businessline) The India Meteorological Department (IMD) said the system will intensify into a tropical cyclone before making a landfall. According to the protocol, this cyclone would be named ‘Nilam’.

The IMD suggests landfall over an area extending from Chennai to south coastal Andhra Pradesh. But, according to global forecasts, the cyclone might move west over the sea and aim the southern Tamil Nadu coast and adjoining north-east Sri Lanka.

These forecasts also suggest that the system might intensify another round and could be dragged north along the Tamil Nadu coast towards Chennai.

Meanwhile, the south-east Arabian Sea is also expected to throw up a low-pressure area, which might intensify a round and clamber up along the west coast, before being dispersed over northern peninsula.

An IMD warning said heavy to very heavy rainfall would occur at one or two places over Tamil Nadu and heavy over Kerala during the next three days.

Posted by Rajan Alexander at 11:27 PM