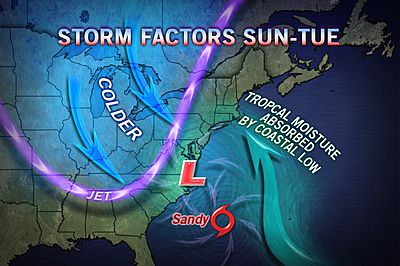 (Accuweather) The realm of possibilities continues to range from Sandy escaping out to sea, with nothing more than blustery, much cooler air sweeping in, to a dynamic storm turning inland packing coastal flooding, flooding rainfall, high winds, downed trees, power outages, travel mayhem and even Appalachian snow.

From a weather map standpoint, the worst-case scenario is for Sandy as a hurricane or hybrid storm to be captured as chilly air and strong upper-level winds join in from North America. Meteorologists refer to this as an atmospheric "bomb”. 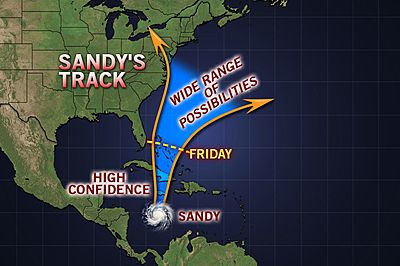 People from eastern North Carolina to Maine and Nova Scotia need to keep their guard up in case the worst-case scenario occurs.

An example of such an event includes 1991's Perfect Storm. However, as bad as it was, the worst of it remained offshore. Other October storms with a real bad attitude, which hugged the coast, were 1878's Gale, 1923's unnamed storm and 1954's Hazel.

If the assumption that the storm turns inland is correct, the worst conditions would be near and well northeast of the storm center as it moves inland. This is where the strongest winds, heaviest rain and greatest storm surge would be due to the onshore flow of high-speed moisture.

For example, a storm with hurricane strength turning inland over New York City would have tremendous impact from New York to Boston and inland to Albany, but there would likely be a sweep of dry air, gusty offshore winds and minimal concerns farther south from Philadelphia to Washington, D.C.

There is another scenario that is more common. Quite simply, tropical systems and non-tropical systems do not like to join forces very often. In this case, Sandy would be more of a side show. 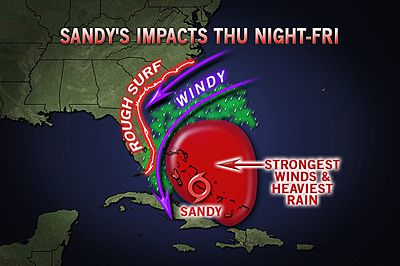 This scenario would generate a more common nor'easter nearby but offshore with significant, but far less-damaging impact. In this case, Sandy itself would not be drawn in but would escape out to sea and some of its moisture would feed the storm. Drenching rain, gusty winds and minor flooding problems would focus on New England and neighboring Canada.

Regardless of the scenarios, a sure bet with the weather pattern this weekend into early next week will be the northward spread of rough surf and rip currents along the Atlantic coast and building seas offshore. Seas offshore would reach 30 feet or higher in the proximity of Sandy.

Posted by Rajan Alexander at 11:19 PM