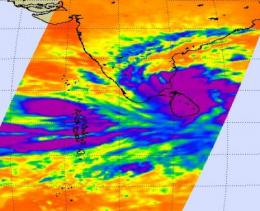 The Atmospheric Infrared Sounder (AIRS) instrument aboard NASA's Aqua satellite captured an infrared image of Tropical Cyclone Nilam on Oct. 29 at 2029 4:29 p.m. EDT.
At the time of the AIRS image, the strongest storms with coldest cloud top temperatures were covering Sri Lanka and stretched into the open waters of the Northern Indian Ocean.

Cloud top temperatures in those areas were as cold as -63F (-52C) and are indicative of heavy rainfall. On Oct. 30 at 1200 UTC (8 a.m. EDT) Tropical Storm Nilam had maximum sustained winds near 45 knots (51.7 mph/83.3 kph).
It was located about 265 nautical miles (305 miles/491 km) southeast of Chennai, India, near 9.4 North latitude and 82.9 East longitude and moving northwest at 6 knots (7 mph/11.1 kph). Nilam's center was forecast to move over northern Sri Lanka and make landfall on Oct. 30 in Tamil Nadu, located in southern India. Tamil Nadu is located between Pondicherry to the north and Trivandrum to the south.

Posted by Rajan Alexander at 11:03 AM