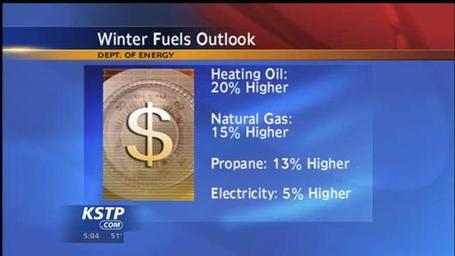 (Bloomberg) U.S. households that use heating oil will face record prices this winter as weather forecasters predict colder temperatures in the Northeast that will drive up demand, according to a government report.

The Energy Information Administration, which tracks and analyzes energy data, projects households will spend 19 percent more on average for heating oil and 15 percent more for natural gas from Oct. 1 to March 31, the period covered in its short- term energy and winter fuels outlook released today.

“It is going to be colder than last year and as a result of that, heating bills are going to be higher,”

About half of U.S. households use natural gas as their main heating source. While only 6 percent of U.S. homes use heating oil, 80 percent of families that use the fuel are clustered in the northeastern part of the country, according to the EIA.

The EIA report says its prediction for higher heating bills stems from an expected return to normal winter temperatures east of the Rocky Mountains compared with last winter’s unusual warmth.

“There has been a trend towards warmer weather so if we end up with somewhat above normal temperatures rather than just slightly below, that would reduce fuel oil needs and presumably would lead to better balance in the markets and somewhat lower prices,”

The agency expects that households relying on heating oil will spend an average of about $407 more this winter, a 19 percent increase over last year, as a result of higher prices and consumption. The average expenditures are expected to reach record levels, according to the EIA.

“This is going to be a very tough winter for many poor families,”

Congress cut funding for LIHEAP to about $3.5 billion in fiscal year 2012, a $1.6 billion drop from two years earlier, leaving less federal assistance for families in need, according to the group.

Rising heating costs are also likely to hit middle-class households, which could ripple through the economy as families have less money to spend for other essentials, Wolfe said.

The group, whose members include Exxon Mobil Corp. based in Irving, Texas, has criticized Obama for not doing enough to promote domestic development of oil and gas.

While oil prices are set on a global market, more U.S. production would help the economy and reduce reliance on oil imports, Felmy said.

The EIA report does project higher U.S. oil production, which could help Obama refute Republican claims he has been overly focused on developing renewable sources of energy rather than on extracting cheaper fossil fuels.

U.S. output is rising from drilling in the North Dakota Bakken shale formation and in the Permian Basin and Eagle Ford areas in Texas.

Crude oil prices are projected to decline as production increases. Brent oil will average $111 a barrel in the fourth quarter of 2012 and fall to $103 a barrel in 2013, EIA said.

Natural gas inventories at the end of September were 3.7 trillion cubic feet, or 8 percent more than at the same time last year, according to EIA.

The agency, which is a division of the U.S. Energy Department, said Henry Hub spot prices will average $2.71 per million British thermal units in 2012 and rise to $3.35 per million Btu in 2013. Henry Hub in Erath, Louisiana, is a benchmark for the fuel.