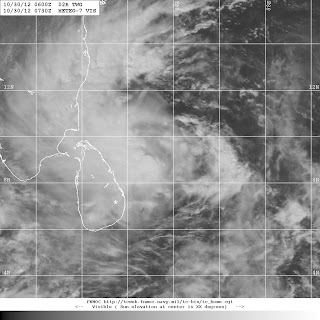 The IMD around 1 pm declared the deep depression over southwest Bay of Bengal as Tropical Cyclone Nilam. The storm however remained practically stationary while intensifying into cyclonic strength.

It lay centred at  0830 hours IST of today, the 30th October 2012 near latitude  9.00N  and  longitude  82.00E,  about  500  km  south-southeast  of  Chennai  and  100  km  east-northeast  of Trincomalee (Sri Lanka). The system would move northwestwards and cross north Tamil Nadu and adjoining  south Andhra Pradesh coast between Nagapattinam and Nellore by 31st  October, 2012 afternoon/evening.

Synoptic Situation as on Tuesday 11.30 am IST:


BB-10 (Deep Depression), it seems, has changed its mind. It is refusing to cross land, and has turned its back on Sri Lanka, after coming to within 50 kms from its shores!

Now at 8.8N and 83.4E,, its showing an "undecided" course. It has moved 100 kms Eastwards. Obviously it is troubled by the high pressure ridge in the upper levels which has descended to 14N.

But, the intense convective clouding shows no sign of any trouble, as it is now covering areas along Sri Lanka and adjoining TN coasts, with cloud top temperatures at -85c. Core pressure at 996 mb and core winds at 40 knts.(Deep Depression).

"Cyclone Nilam will hit the area between Nellore and Nagapattinam by Wednesday evening,"

According to the IMD, Kollidam received the highest rainfall at 15 cm.

When it (cyclone Nilam) is approaching the coast, the speed could reach up to 90 kmph," the IMD said.

Meanwhile, the district administrations of Nagapattinam and Cuddalore districts said they were prepared for emergency situations. No evacuations have been ordered so far but shelters are being kept ready.


Posted by Rajan Alexander at 1:41 PM