Heavy snowing in Alps. Wonder why Greenpeace is worried snow will get extinct? 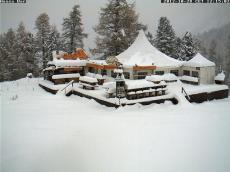 (http://www.english.rfi.fr) Electricity has been cut to more than 30,000 homes in the French Alps following heavy snow and strong winds on Saturday night.

On Sunday morning, the electricity provider ERDF says more than half of the affected households are in the Haute-Savoie department, near the border with Switzerland.

Power has been cut to 7,000 and 5,000 homes in the Isère and Savoie departments respectively.

More than 100 technicians are on the ground working to restore electricity to the homes, and more workers expected to join them during the course of the day in the Rhine-Alps and Bourgogne regions.

However, strong winds still battering the area are delaying the repairs.

ERDF has warned people not to touch fallen powerlines.

Before the weekend, authorities warned drivers to be careful on the roads in the snowy conditions.
Météo-France has also issued warnings for much of the country’s south-east, particularly for strong winds, snow and black ice.

The early winter conditions are also affecting areas near the Mediterranean, with the island of Corsica also expecting snow.

Winter’s early arrival followed a mild summer across much of France.

Posted by Rajan Alexander at 11:33 AM