Sandy has lost its tropical characteristics and the National Hurricane Center has now classified the system as "post-tropical". However, this does not mean anything in terms of impacts (damaging winds, coastal flooding, etc.) as they will continue to be the same.

Sandy made landfall as a post-tropical cyclone on the southern coast of New Jersey near Atlantic City at 8 p.m. with top sustained winds of 80 mph.

Given that Sandy is no longer officially a hurricane, The Weather Channel and weather.com will refer to the system as "Superstorm Sandy". 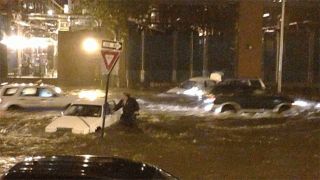 ·   With the first high tide cycle this morning, significant coastal flooding inundated many locations in southern New Jersey.
·  During the second high tide cycle Monday evening, storm surge flooding inundated portions of the New York City area. Water was reported to be three feet deep in 4 New York plaza and six feet deep outside. Large amounts of water flooded the path train system under the Hudson River. WNBC reported that water was up to the attics of homes on Staten Island with rescues ongoing. FDNY engine 206 headquarters on Grand Street was evacuated by boats. An iWitness Weather photo showed flooding near Avenue C and 14th street in New York City. A tweet sent by @MTAinsider showed water in the Hugh L. Carey Tunnel (Brooklyn Battery Tunnel).
·   A new storm tide record of 13.88 feet was set at The Battery in New York City on Monday evening. The old record was 11.2 feet in 1821. Tide levels in Sandy Hook, N.J. have topped the previous record from the Dec. 1992 Nor'easter and Hurricane Donna in 1960!
·    Coastal flooding will continue through additional tide cycles beyond Monday's peak into Tuesday afternoon, in some areas!


3: Near Six Million Without Power 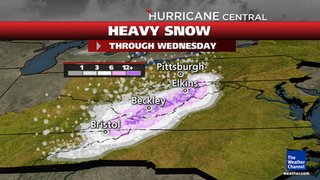 This storm won't sweep out to sea quickly, but slowly, painfully wind down over the next few days.
Tuesday's winds will still be strong (though not nearly as much as Monday) over much of the Mid-Atlantic states and Northeast.  They'll also be brisk, and particularly strong downwind of the Great Lakes Tuesday into the Ohio Valley and Appalachians.
Lakeshore flooding along the south shores of Lakes Michigan and Lake Erie will likely continue.
While winds take another demonstrative downward step Wednesday, they'll still be pesky enough to potentially hamper power restoration efforts, particularly along the seaboard from southern New England to the Outer Banks, as well as the Ohio Valley and Great Lakes.
Winds will continue to wind down gradually through the rest of the week, being the most pesky downwind of the Great Lakes, Long Island, the Jersey Shore, Delmarva, Cape Cod and Martha's Vineyard.

Behind the storm, cold air will be dragged into many of the areas that have the risk of losing power.
Expect early morning lows to bottom out in the 30s from the Great Lakes and Ohio Valley into the Tennessee Valley and Appalachians into the interior Northeast, with 40s for lows encroaching into lower elevations of the Mid-Atlantic States by Wednesday morning.
Daytime highs will only rise into the 40s and 50s over much of the areas that may be without power through much of the rest of the work week.

Posted by Rajan Alexander at 2:29 PM