Cyclone Nilam is aiming straight for Nagapattinam and Nellore. Ports are on alert and fishermen have been advised against venturing out to sea. Schools and colleges in Chennai remained closed on Tuesday.

According to the IMD, Kollidam received the highest rainfall on Tuesday at 15 cm. "The northern coastal districts will experience heavy rainfall," the IMD added. "When it (cyclone Nilam) is approaching the coast, the speed could reach up to 90 kmph," the IMD said. 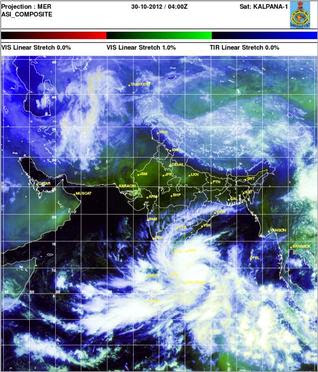 (Hindu Businessline) The deep depression over southwest Bay of Bengal is biding its time 500 km south-southeast of Chennai for intensification into a cyclonic storm followed by a landfall.

The European Centre for Medium-Range Weather Forecasts and the London-based Tropical Storm Risk Group said that the storm may eye northeast Sri Lanka and adjoining southern Tamil Nadu coast for a landfall by tomorrow evening.

The European agency goes on to predict that part of the storm may be propelled to north along the coast to Chennai and south coastal Andhra Pradesh.

The India Meteorological Department (IMD) has projected that the cyclone, to be named Nilam when formally declared as one, to move northwestwards and cross north Tamil Nadu and adjoining south Andhra Pradesh coast by tomorrow (Wednesday) evening.

Meanwhile, watch of a counterpart storm breaking out in the southeast Arabian Sea has been maintained.

In fact, the Bay cyclone will have a rub-off effect on the building storm across the peninsula, as per IMD projections. This storm may travel all the way north off the west coast to Gujarat for a landfall.