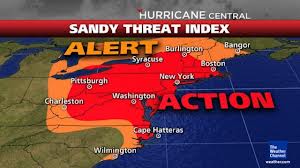 A record storm surge from super-storm Sandy sent floodwaters pouring into Lower Manhattan on Monday night as parts of New York City were plunged into darkness by widespread power outages.

The East River and the Hudson River flooded subway and car tunnels, and several feet of seawater swamped into Battery Park at the foot of Lower Manhattan, with waters rising and rain showing no sign of abating.

"Lower Manhattan is being covered by seawater. I am not exaggerating. Sea water is rushing into the Battery Tunnel,"

The Battery Tunnel is a road tunnel linking the south end of Manhattan, New York's financial center, to Long Island under the East River.

Cars could be seen afloat in several Manhattan streets, and the facade of a six-story building collapsed. At least one New Yorker was killed when a tree fell on his house, and there were reports of several more casualties.

Local broadcaster WNBC said some houses on Staten Island were "flooded up to their attics" while the New York police department sought boats to conduct rescue missions there and on Brooklyn's Coney Island.

Two people were killed Monday when the high winds of megastorm Sandy toppled a tree onto a vehicle in New Jersey, an official from the local emergency management office said.

The storm has killed at least three people in the United States since it crashed into the eastern seaboard, bringing hurricane-force winds and torrential rains to one of the most highly populated areas of the country.

Posted by Rajan Alexander at 8:31 AM