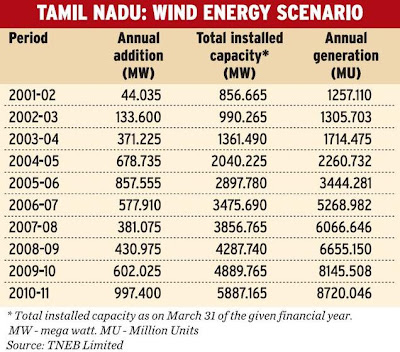 (DNA)In the wake of wind season drawing to close and delay in commissioning of the key thermal power projects and the power situation consequently getting worse, Tamil Nadu Generation and Distribution Corporation Limited (Tangedco) is pinning its hope on early onset of North East monsoon in the state to meet the power requirement.

Following drop in wind power generation, the rest of the state, except Chennai, has been severely hit by unscheduled cuts ranging from 10 hours to 14 hours a day.

On Thursday, the wind energy had drastically reduced to 36 million units (MU) from the normal level of 75 MU per day generated during peak wind season between May and September.

The quantum of load shedding enforced by Tangedco has also increased sharply in recent days with the decline in wind generation.

“We are afraid that drop in wind power generation is a sign of wind season drawing to close. During peak wind season, we got around 3,000 MW to 3,500 MW a day from the windmills with an installed capacity of 7,000 MW. We will fall short of supply in the post wind season,” a senior Tangedco official said.

“Besides, the cost of a unit of power in the exchanges is also very high ranging from Rs 10 to Rs 15,” the official pointed out.

The official said that if the NE monsoon sets in, in the third or fourth week of October, widespread rain across the state will bring down demand for power.

“Once the rain starts, we will save at least 2000 MW a day from agricultural consumption,”

the official said, adding that till then the power consumers have to bear with unscheduled power cuts.

The commissioning of the Vallur, North Chennai and Mettur thermal power projects in coming months would help improve power situation, the official added.

Posted by Rajan Alexander at 9:51 AM