NewYork Times: Sandy Caused not by Global Warming but by Cold Air. Here’s why! 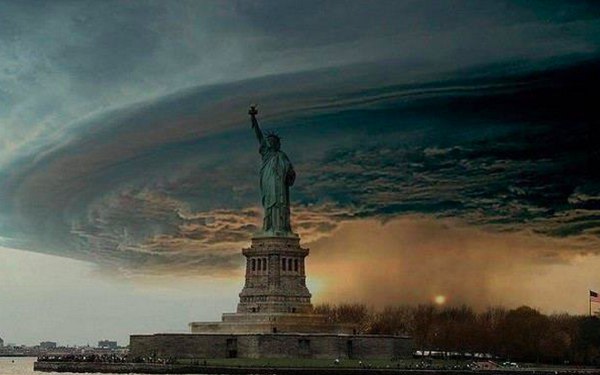 (Eric Berger in New York Times) It’s late October, when seas outside the tropics are supposed to be falling into a winter chill. So what is a “super” hurricane doing approaching the northeastern United States and strengthening as it’s crossing the mid-latitude waters of the Atlantic Ocean?

This is a fair question. It’s also reasonable to ask whether this storm is a product of climate change, that a warmer world will produce more “super” storms.

Certainly that’s the point of view espoused by some environmental activists.

“Folks, this storm is exactly the sort of thing climate scientists have been worried about for years,"

“Global warming is putting hurricanes on steroids and we’re beginning to see the effects.”

Expect to hear more of the same in the wake of Sandy’s destruction. After hurricanes the natural reaction of humans is to find someone to blame — be it forecasters, government or in a more nebulous sense, climate change.

However the science of climate change and hurricanes does not support this conclusion. Even before Hurricane Katrina ravaged the Gulf Coast in 2005 scientists have been hard at work trying to understand how increasing levels of carbon dioxide, and rising temperatures, will affect hurricane activity.

At first blush, it would seem that warmer seas would fuel more and stronger hurricanes, because tropical storms typically form and intensify when waters are at their peak temperatures. But in this case, nature is more complicated, and while warmer oceans may be more favorable in a warmer world, other factors appear to temper hurricane activity.

After a lot of back and forth in the scientific community, an important paper (see abstract) came out in 2010 in Nature Geoscience. It was authored by a working group established by the World Meteorological Organization to study the effect of climate change on hurricane activity. Its members included scientists who are both very bullish on climate change increasing damage from hurricanes (i.e. Greg Holland) and scientists who are not (Chris Landsea).

Here were the paper’s main conclusions:
For more of a discussion on the Nature Geoscience paper, see this blog entry I did at the time.

But what about Sandy in particular? It is, in part, being fueled by water temperatures that are several degrees higher than normal. The image below shows Sandy traversing an area where sea surface temperatures are 2 to 4 degrees Fahrenheit above normal.

Perhaps these temperatures are a fraction of a degree warmer due to climate change, and perhaps not. North Atlantic sea surface temperatures have generally been above normal since 1995 due to a natural feature called the Atlantic Multidecadal Oscillation.

Moreover the recent strengthening of Hurricane Sandy is attributable, in large measure, to baroclinic forcing. This is a technical term that represents the collision of very warm air (Sandy) with very cold air (a strong cold front moving southeast from Canada). The collision of these air masses is providing energy to Sandy.

In other words, cold air is in some sense allowing Sandy to strengthen. Cold air.

The bottom line is that climate change is unquestionably having an effect on the weather around us by raising the average temperature of the planet. This is producing warmer temperatures and very likely increasing the magnitude of droughts. However, it is a big stretch to go from there to blaming Sandy on climate change. It’s a stretch that is just not supported by science at this time.