Cyclone Nilam can be a dwarf of Sandy but still dangerous 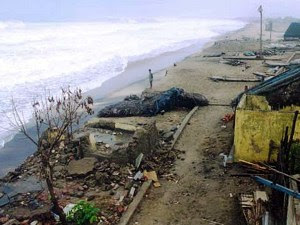 "We expect damage to thatched hutments, trees, and crops, and power and telephone line disruptions...We're asking fisherfolk already in the sea to come back and those on land not to sail into the sea,"

Mrutyunjaya Mahapatra, the head of the cyclone warning division at the India Meteorological Department said. The IMD has predicted "very rough seas" off northern Tamil Nadu, Puducherry, and southern Andhra Pradesh over the next 48 hours.

"The decision will depend on the tailwinds and crosswinds that we expect tomorrow evening along the approach path and the runway,"

Ramachandran Suresh, director of aviation meteorological office in Chennai toldthe media. Commercial aircraft, Suresh said, have limits on the speeds of tailwinds and crosswinds in which they can operate.

Scientists say Nilam is a dwarf in relation to Sandy, the severe north Atlantic cyclone that made landfall near Atlantic city, New Jersey, at about 530 AM IST today with hurricane wind speeds extending up to 250-km from the centre of the storm.

The most severe winds from Nilam are expected to stretch only about 120-km to 130-km from the eye of the storm, a senior IMD scientist said.

"Many factors contribute to the size of a cyclone, one of them is the water basin and cyclones in the Atlantic and Pacific are typically bigger than those in the Bay of Bengal or the Arabian Sea," the scientist said.

The IMD said it has alerted state authorities as well as issued cyclone bulletins for airports and will continue issuing alerts every three hours as the cyclone approaches.

Posted by Rajan Alexander at 10:54 AM