Why Global Warming Cannot Simply be the Cause of Glacier Melt 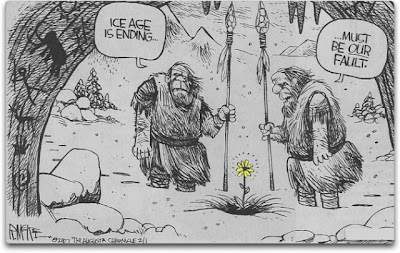 (http://www.engineeringnews.co.za) One of the major achievements of mankind, over many centuries, has been the development of logical thinking processes. Science now has a well-established process of thinking patterns by which scientists work.

Some pieces of evidence that appear in scientific investigation may seem to be confusing. This is why the rules of logic have to be followed to ensure that there are no false conclusions.

Let me now ponder the issue of claims of melting glaciers and melting ice, in general that is blamed on global warming.

First, let us establish a fact that even the extreme green lobby does not dispute: total global warming over the last century has been less than 1 ºC; remember that figure – less than 1 ºC.

The properties of water and ice are well known. Ice melts at 1 ºC. Let us get that clear – to melt ice, the temperature has to go up past 0 ºC to at least ‘plus something’.

The number of people I come across who simply think that if air warms a little it will lead to glaciers melting is totally amazing.
So, let us imagine, on a given day, that the air temperature over a glacier does pass 0 ºC and goes up to, say, 2 ºC. Then we are above the melting point and melt- ing can start. But what happens when night arrives? Usually, the difference between day and night temperature is significant, and so at night it will drop below freezing and the water will freeze to ice again. A temperature of 2 ºC is not going to result in some glacier coming apart.

So, if air temperature above a glacier is, say, 2 ºC, then a huge amount of heat must be extracted from the air to melt ice, even if the ice temperature is right near 0 ºC. There will just not be enough heat, and any melted water will refreeze at night.

But some glaciers are undoubtedly receding. Indian researcher RK Chaujer produced a paper in 2009 titled ‘Climate change and its impact on the Himalayan glaciers – a case study on the Chorabari glacier, Garhwal Himalaya, India: Based on the dating of lichens developed on loops of moraines formed due to various stages of advance and retreat of the glacier’. The paper was published in Current Science.

Chaujer found that “research on various glaciers of the northern and southern hemispheres has shown that most of them started their retreat in the mid-eighteenth century, thereby indicating the end of the Little Ice Age Maximum, which suggests the possibility of a common trend in mountain areas of both hemispheres and the Himalayas”, indicative of a global phenomenon.

The Indian researcher concluded: “These results suggest that climatic changes in the world started during the early to the mid-eighteenth century.” This is long before the historical increase in the air’s carbon dioxide (CO2) content could have been involved in the process of their retreat. Hence, it must be concluded that there is no compelling reason to believe that late-twentieth- century global warming has anything to do with glacial retreat.

So what is happening? We know that, when summer comes around, in glacial areas, glaciers retreat – they have always retreated. The primary mechanism seems to be the sun. The intense sunlight falling on the surface of the ice melts a fine surface layer. This water then runs down fissures, and eventually goes to the bottom of the glacier. There, the water lubricates the interface between the ice and the rock floor. The ice then slides more easily. Sunlight has a major impact and air temperature essentially nothing. When one watches videos of glaciers calving, one sees huge blocks as big as a house fracture off and fall into the ocean. This is not the ice melting – it is ice breaking off under the influence of gravity because it has been pushed out with diminishing structural support so that large blocks break off.

Over the weekend I prepared two blocks of ice in my fridge, with identical flat surfaces of about 20 cm2 each. I took a plank of wood and put it on the lawn by my swimming pool. I inclined the wood at about 30º. The wood was 40 cm wide. I put the two ice blocks at the top of the incline. I then placed a table in a position so that it cast a shadow over only one ice block. I sat with a stopwatch and waited. After a quarter of an hour, the ice block in the sun suddenly slid down the plank to the bottom. The one in the shade had not moved at all half an hour later.

In fact, the one in the shade had not moved at all another half hour later. I repeated the experiment a few times, with the same results. The air temperature here in South Africa on the day was 24 ºC – way above that of a glacial region. Remember that both blocks were in the same air temperature all the time.

So, Chaujer is correct: CO2 is not leading to melting glaciers – it has to be something else. I imagine it is sunlight. The more sunlight that falls on a glacier, the more it will move, owing to water lubrication. So, glacier movement is much more likely to be linked to the amount of cloud cover over a period than to any global warming.

Svensmark, of Denmark, proposes that cloud cover is linked to the sun’s magnetic influence over cosmic rays, which, in turn, influence total cloud cover. We need to think of melting ice in that context.