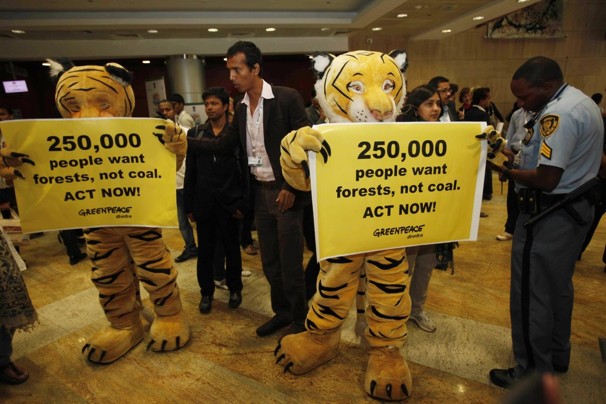 It is an open secret that Greenpeace had been the nerve centre for engineering protests from the Kudunkulam anti-nuclear protests, Mahan coal block in Madhya Pradesh protests to Tata’s Power Plant in Mundra, Gujarat.  Any energy related protests in the country, this is part of the core group behind such protests.

Shamelessly, Greenpeace sits with its foreign sponsors in Indian soil to draw up strategies in crippling India’s energy security. Never mind that Barack Obama in his Presidential debates took pride to claim that under his administration coal energy and mining growth rates were significantly improved. Never mind that even Green Germany is carrying out the largest expansion in coal energy capacities. But the US and Europe want India to give up using coal though India has the 4th largest reserves in the world 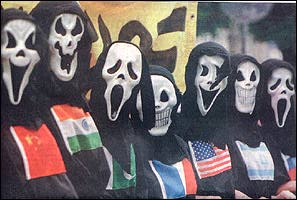 (HindustanTimes) The recent spurt in protests against projects from Kudankulam in Tamil Nadu to Mahan coal block in Madhya Pradesh to Tata’s Power Plant in Mundra, Gujarat, has raised a key question --- are American and European philanthropic groups supporting these agitations?

A conference organised by such groups from the two most developed regions of the world --- US and Europe --- in Istanbul this July provides an insight how international organisations are willing to support – including financially - Indian non-government organisations to stop upcoming coal fired power plants, considered a trigger for climate change.

A background paper commissioned by US based Climateworks Foundation for the International Coal Strategy Conference, and accessed by HT, indicates that the strategy is to make local protests against the coal fired power plants more visible. If effective, this could mean more bad news for India’s plans to majorly enhance its coal power production.

From India, Vinuta Gopal of Greenpeace India, Ritwik Dutta, an environment lawyer, Soumya Dutta of Energy and Climate Group, Sriniwas Krishnaswamy of Vasunda Foundation and Babu Rao an activist participated in the conference.

The paper prepared by Washington based World Resources Institute says of the total 999 new coal fired plants being proposed globally, more than half are in India. “NTPC (National Thermal Power Corporation) is ranked no 1 with 47 proposed projects,” the paper said, describing China as number two.

The paper also lists five other Indian companies, apart from NTPC, among the top 10 players in the proposed coal fired plants. In all, India plans 455 newly proposed coal fired power plants with a total installed capacity of 519,396 MW, almost 2.5 times of the present generation.
The institute said realisation rate of coal power plants in India was low because of strong opposition from local residents owing to land seizures, air and groundwater pollution impacts, effect of thermal discharges of fisheries and displacement of communities.

Greenpeace India’s chairperson Ashish Kothari told HT that it was campaigning for energy security of the majority of the India’s poor.

“Not only Greenpeace but many of us believe that the path to energy security is not coal/dams/nuclear but decentralized renewable energy,” he said.

Some of the international NGOs want to tap the brewing unrest to stall key infrastructure projects. “Locals would remain focal point for the protest,” said a participant at the conference.

Another added that the clear strategy was that the foreign funding agencies and NGOs will remain in the background and support “people-centric” protests to stop some power plants for becoming reality.

Admitting that Greenpeace India, which is anchoring locals protest against allocation of coal blocks in Mahan, Madhya Pradesh, was represented at the meeting, the NGO’s Executive Director Samit Aich in an email reply to HT said they have not committed to closing down three power plants in India.

He claimed the organization discussed the consequences of the massive ongoing coal expansion on the ecology of central India in general and tribals in particular at the conference. The conference included topics such as campaigns to develop “winning strategies” against demand side threats (new coal plants) and supply side threats (mining and infrastructure expansion). The conference also focused on networking between NGOs to have bigger impact.

Ritwik Dutta claimed that no foreign funding was promised at the conference but sought funding saying money was required to fight “resource rich” multi-nationals.

“We cannot be selectively global by allowing foreign investment but be against foreign funding for campaigns against the projects,” he said.

Many in the government admit that there has been a sudden spurt in protest against big infrastructure projects across India and suspect that they are being funded by international NGOs. Aich and other environment groups have invited the government to investigate their source of funding.

The other hosts of the conference were US based Positive Ventures and Rockfeller Brother Fund and European Climate Foundation, advised by John Schellnhuber, who is also advisor to EU Commission president Manuel Barroso. Ten foreign donors also participated in the conference.