Where’s the case for organic foods? 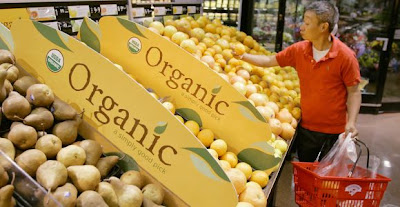 Bruce Ames won the National Medal of Science from President Clinton in 1998. He invented the Ames Test for cancer risks in our food back in the 1970s. He found that half of all synthetic pesticides caused cancer in rats at high doses. The Greens applauded and gave him the Tyler Prize, the “environmental Nobel.”

Then, however, Ames started testing the cancer risks in the natural compounds that Mother Nature herself inserted in the food—to discourage pests. Half of the natural food compounds also caused cancer in rats at high doses! Ames published “Dietary Pesticides (99.99% natural)” in the Proceedings of the National Academies of Science clear in 1977.  Ames concluded that eating organic foods reduces your dietary cancer risk by just one ten-thousandth of a percent!

The Ames paper didn’t faze the organic movement however. We, the people, apparently wanted to believe that the synthetic chemicals were dangerous and that “natural” was better in all things—despite “natural” rats in grain, Salmonella bacteria in food, and tuberculosis in milk. In fact, many buyers don’t know that organic farmers use as much pesticide as conventional farmers. “Organic” pesticides aren’t much different than non-organic—they all kill pests, not people.

We also wanted to believe that we could protect our families by paying extra for our fruits and vegetables! Unfortunately, the world of 2050 will need perhaps 3 times as much food and organic farmers produce about half as much per acre as conventional farmers. The combination makes organic farming a long-term threat to the world’s wildlife.

The L. A. Times’ editorial also seems to indict chemical fertilizers. But if it makes no sense to believe spraying pesticides on plants will change their vitamin content, why believe that adding more of the most important plant food to the soil will make the plant unsafe?  The nitrogen that fertilizer companies take from the air is the same N that makes up 78 percent of the air we breathe. The plants can’t tell the difference between clover N and N from a bag of ammonia crystals. They have to wait for the soil to break down the N in both cases. Nevertheless, “no inorganic nitrogen” is the most basic tenet of organic farming. No reputable study supports this fear of nitrogen taken from the air.

Humans come wired with lots of fear genes. When Spanish explorers brought tomatoes and potatoes back from the New World, Europeans people refused to eat them. The Duchy of Burgundy outlawed potatoes because the tubers were said to look like the lumpen hands and feet of lepers!  Are the arguments for organic food today based on any better science?  The Stanford study seems to say they aren’t.