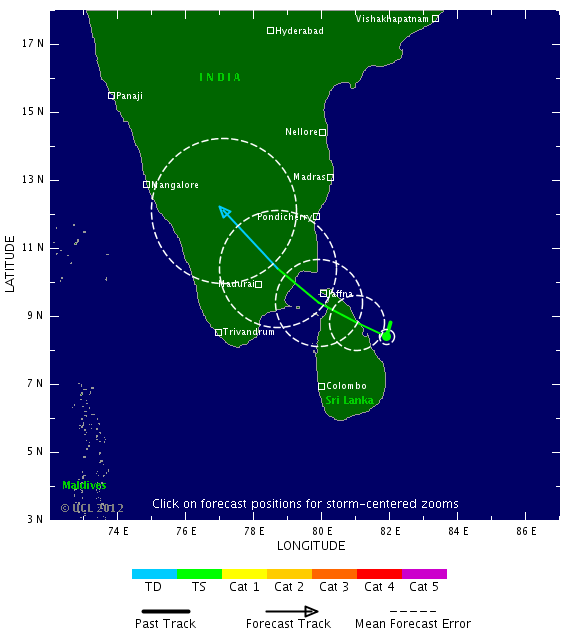 The Indian Meteorological Department (IMD) issued cyclone alert for north Tamil Nadu, Puducherry and south Andhra Pradesh coast. According to an IMD bulletin on Monday  night, the deep depression over southwest Bay of Bengal lay centred at about 500 km south-southeast of Chennai and 130 km east-northeast of Trincomalee (Sri Lanka).

The system would intensify further into a cyclonic storm and cross north Tamil Nadu and adjoining south Andhra Pradesh coast between Nagapattinam and Nellore by Wednesday evening.

The met office has forecast rainfall at most places with isolated heavy to very heavy rainfall over coastal Tamil Nadu and Puducherry from Monday night.

Squally winds speed reaching 45 to 55 kmph would prevail along and off the coasts during next 12 hours.

Fishermen along north Tamil Nadu, Puducherry and adjoining south Andhra Pradesh coasts were advised not to venture into the sea.

The authorities in Andhra Pradesh have sounded high alert along the south coast and also in adjoining Rayalaseema region. Third warning signals were hoisted at all four ports on the south Andhra coast.

Nellore district administration has advised people in the low-lying areas near the coast to move to safe places. The districts of Guntur, Prakasam, Krishna, West Godavari and East Godavari have also gone on high alert. The officials have asked fishermen, who had gone in high seas, to return to the coast immediately.

The authorities have also set up control rooms in Nellore and Ongole in Prakasam district to monitor the situation.