Hurricanes caused by Global Warming? How do they account for hurricanes during the Little Ice Age? 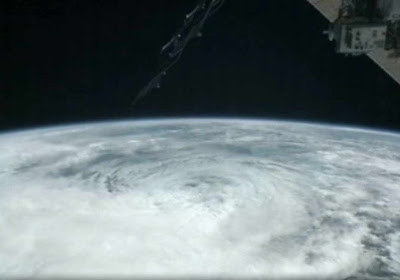 To give you an idea of the strength and devastation associated with these storms, below is a listing of some of the most memorable hurricanes since pre-colonial times. While the number of casualties from these storms has gone down over the years, the cost from the damage caused by these storms has risen tremendously. That has resulted from more building along the coastline, and more expensive homes and businesses.

·       Hurricane of July, 1502--Was a storm that the great explorer and discoverer of American, Christopher Columbus, predicted would strike the island of Hispanola. He used his prediction to warn the Governor of Hispanola, Nicholas de Ovando, who had 30 ships in his fleet set sail back to Spain. However, the governor ignored him, and refused Columbus' request to stay in port at Santo Domingo. Within two days the storm struck in the Mona Passage between Hispanola and Puerto Rico, and sank 21 of the 30 ships, and killed approximately 500 sailors.
·       Tempest of 1609--At the time that the first ever colony in the United States was being developed, a strong hurricane menaced the Western Atlantic in the weeks following the departure of a fleet with 500 colonists left Great Britain for the New World. The ships then met with the maelstrom head on, and scattering all the vessels. Most were able to survive the onslaught of Mother Nature except for the flagship of the fleet, the Sea Venture, which was deposited in the infamous "Isle of Devils." Nevertheless, those who were on the ship still managed to reach shore, and received a much better fate than those, who had already situated themselves in the colony. The story of the Sea Venture was the basis of William Shakespeare's play, The Tempest.
·       Colonial Hurricane of 1635--Was a powerful New England hurricane that struck the Massachussetts Bay Colony in 1635 some fifteen years after the Mayflower struck land at Plymouth Rock. This storm had reminded many of the pilgrims and settlers of past hurricanes that struck in the West Indies or Caribbean. Many of the pilgrims believed that this storm was apocalyptic.
·       1667--The Year Of The Hurricane--At a time when the Mid-Atlantic states of North Carolina, Virginia, and Maryland agreed to temporarily halt production of tobacco, a strong hurricane ripped through the Mid-Atlantic region on August 27th. While there was no recorded statistics such as where the storm made landfall, its track, and its forward speed and intensity. It destroyed 80 percent of the tobacco and corn while destroying some 15,000 homes in Virginia and Maryland.
·       Accomack Storm of October 1693--This storm was captured by Mr. Scarburgh at his residence in Virginia's Eastern Shore. Described by many weather record keepers as a very powerful storm, the Accomack Storm "cut inlets as far north as Fire Island, near New York City."
·       The Great Gust of 1724--According to Rick Schwartz's book, "Hurricanes and the Mid-Atlantic States," two hurricanes brought significant wind and rain to the Mid-Atlantic region in 1724. The first storm moved through the area around August 12th, and caused torrential rains and devastating winds. Less than a week later, another violent storm system came through on August 17th, 18th, and 19th with violent winds and rain. These two systems are among the most significant tropical storms to affect the Mid-Atlantic during the colonial period of the late 1600s and 1700s.

Posted by Rajan Alexander at 7:35 PM