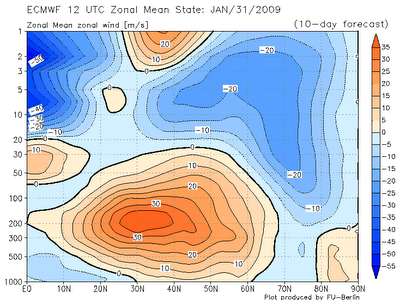 (Climate Realist) Sudden stratospheric warming (SSW) has been the 'in' topic in meteorological circles in the last couple of years, ever since the severe winter of 2009/2010 in which December was the coldest since the late 19th century.

SSW is linked to sudden large increases in temperature over a few days in the stratosphere over the Arctic.

This temperature change cause winds to reverse their normal direction.

For some time, forecasters have noted that a sudden weakening in high altitude winds in the stratosphere was often followed in winter by blocking surface weather systems.

These blocking weather systems tend to bring much colder conditions across Europe and the UK from the east, stopping milder air pushing in from the Atlantic.

There have been notable successes from observing this phenomenon on shorter time scales.

A week before the onset of severe cold that begun at the end of November 2009, stratospheric warming was observed, which led to a forecast which successfully included a risk of cold conditions developing across the UK.

The cold weather which occurred in 2006 and 2010 also coincided with sudden stratospheric warming.

But it would be much more helpful if the onset of such severe weather could be forecast further ahead, and that is what researchers at the Met Office have been working on, publishing research in Environmental Research Letters last month.

A breakthrough came last year when scientists at the Met Office demonstrated a clear link between stratospheric influence on climate during a sudden stratospheric warming, with easterly winds burrowing down through the atmosphere to affect the jet stream.

Following on from this, researchers at the Met Office have produced a model that is better at simulating stratospheric warming, which may give forecasters a better chance of signalling cold winters in future.

By using this new model with data available from autumn 2009, the Met Office showed that they could have seen the cold coming well in advance.

But blasts of cold weather are not always due to SSW.

There are several competing influences each winter, such as Atlantic sea surface temperatures, volcanic eruptions, snow cover and solar forcing.

For example, the research highlights the deep solar minimum as a contributory factor to the observed severe weather conditions in 2009/2010.

But separating their effects, and establishing which has the largest impact, remains a big headache for forecasters.

Sudden stratospheric warmings (SSWs) are indeed vital events. They are essentially driven by certain shifts in the jet stream which are driven by PREDICTABLE changes in solar activity and sun-earth magnetic connectivity, and are associated with cold winter blasts in Europe and USA.

Through this understanding at WeatherAction we, as you know, forecast the cold snowy blasts of 09/10 and the snowy and coldest Dec in 100 years in 2010 while the Met Office gave their usual misleading mildisms.

Met Office 'long range' models however are of negative value. While recognizing the importance of the stratosphere they have no idea WHY the stratosphere changes and therefore can forecast nothing in long-range. They will never produce reliable long range forecasts and what they are doing will continue to mislead the public. What they do is not just a waste of taxpayers money but their consistent diabolically opposite to reality long range 'forecasts' are a massive BURDEN on the British economy because they point official bodies and farmers in the wrong direction. The bbq summers which came as floods, the mild winter months which turned to snowmadegons and the drought with floods (LOL!!) this Spring come to mind.

The problem is they start from the premises that weather causes weather.

This is true about one day ahead and reasonably true two days ahead but the further ahead you look the less true it becomes and solar influence rules all. Will they ever learn? To be frank the Met Office and the BBC are not interested in advancing forecasting science - ie by applying solar drivers - because to do so sounds the death-knell of their CO2 delusionism and 'weather drives weather' concepts.

They will only change if forced to do so by the coming public revolt against massive energy price hikes which are a direct consequence of CO2 delusionism and government backed thieving from us all - electricity and gas users - to pay for prayer wheels (wind farms) and other silly green money wasters.

THIS October is interesting both from the point of view of fine spells and cold/stormy blasts of interest in this post and I suggest people pop along to our WeatherAction(.com) website to get forecasts of some important events coming THIS MONTH.

Posted by Rajan Alexander at 7:45 PM