The Hindu: Cyclone Nilam to make landfall this evening 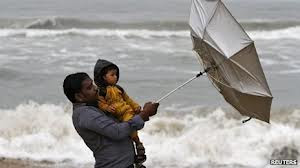 Cyclone Nilam is expected to make a landfall Wednesday evening between Cuddalore in Tamil Nadu and Nellore in Andhra Pradesh, bringing in heavy rains in the region, with tide levels reaching 1.5 meters.


“The cyclonic storm, which lay about 320 km south-south east of Chennai at 0530 hrs today, will move north-north westwards and cross North Tamil Nadu and adjoining south Andhra Pradesh between Cuddalore and Nellore near Chennai by October 31 evening”, a weather bulletin by the Met department said.

Storm surge of about one to 1.5 metres over the astronomical tide would occur, inundating low lying areas of Chennai, Kancheepuram, Tiruvallur and Nellore district of Andhra Pradesh, it said. Under the influence of the system, very heavy rainfall and extremely heavy rainfall (of 25 cm or more) is expected in the next 24 hours, it said.


“Rainfall at most places with isolated heavy to very heavy fall would occur over south coastal Andhra Pradesh, Rayalaseema and north Interior Tamil Nadu during the next 48 hours”, it said.

Squally winds with speeds of 55-65 kmph gusting to 75 kmph would prevail along north Tamil Nadu, Puducherry and coastal Andhra Pradesh. The wind speed would gradually increase thereafter to touch 80-90 kmph as the system moves closer to the coast at the time of landfall, it said.

The condition of the sea would be “high” along and off north Tamil Nadu, Puducherry and adjoining south Andhra Pradesh coast during the next 36 hours, it said.

Fishermen have been advised not to venture into the sea in the next 48 hours.

Posted by Rajan Alexander at 10:41 AM