BBC: UN climate talks in Doha are due to finish with little sign of any agreement between negotiators. 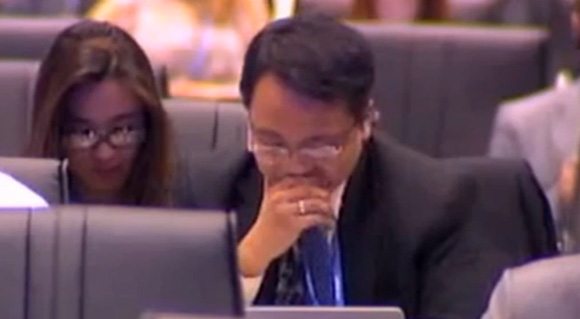 (BBC) Developing countries say there is a lack of ambition among richer countries to cut greenhouse gases faster. The EU and US say the global economic crisis means they don't have any extra money to help poorer nations adapt to rising temperatures. And the host nation Qatar has been criticized for poor leadership in letting the talks process drift.

There are still outstanding disputes about finance, compensation for damages caused by climate change and allocations of carbon permits - so-called hot air. As politicians delay, scientists continue to warn of ever-increasing greenhouse gases.

But this conference - the 18th Conference of the Parties, or COP18 - will not prevent any CO2 being released into the atmosphere - that will be left to future meetings. Indeed if it does not tighten the rules on "hot air" this conference could result in an increase in emissions.

The Doha talks represent the hinge point between the existing UN system - the 15-year-old Kyoto protocol - and a future system to be settled by 2015. The Kyoto protocol binds a dwindling number of rich nations into cutting emissions and helping poor nations get clean energy and adapt to climate change. The new system, championed by the US and others, will oblige rich and poor to share the burden.

The transition has drawn all the world's nations into a negotiation of swirling diplomatic complexity. Of the outstanding issues, finance is the most intractable. Rich nations promised at 2009's turbulent climate summit in Copenhagen - COP15 - to mobilise a fund of $100bn annually by 2020 to help developing nations cope with climate change. But there's precious little indication of how, or indeed if, this figure will be met.

Some EU countries have offered interim funding but the US has been unwilling to commit. US campaigners here have said they are ashamed of their leaders, especially after President Obama appeared to re-kindle his enthusiasm for tackling climate change after re-election.

The finance issue overlaps another conference dispute over a proposed Loss and Damage Mechanism to compensate developing for damage from any future disasters caused by climatic events, although the C-word - compensation - is being avoided because of the implication of guilt.

The other stand-out is hot-air. Under the Kyoto Protocol, Poland and Russia were handed free carbon permits to allow their heavy industries to continue to operate. But when Eastern European industry collapsed, the permits - which have a financial value - were not needed. At this point they became "hot air", with the potential to be sold to other nations. This undermines the regime of cutting emissions overall.

Poland has refused to surrender its permits. The EU has been heavily criticized for allowing this loophole but it's also been trying to avoid any more internal diplomatic crises. So it looks to be moving towards a compromise which will restrict the future sale of "hot air".

Meanwhile, pressure is growing for a dramatic gesture from the host country, Qatar, which has the highest per-capita carbon emissions in the world. UN Secretary-General Ban Ki-moon addressed the conference on Tuesday at the invitation of the host country. NGOs had been led to believe that gas-rich Qatar would pledge to cut its emissions and help poor nations do the same. But in the end the announcement heralded plans for a Qatari institute for climate studies.

"This is welcome," UK climate minister Greg Barker told BBC News. "It's helpful to get new climate science from all sorts of different voices. But we are really looking for more leadership from Arab nations at this time."

The momentous announcement by the UN secretary-general left many wanting. The talks are a foment of rumour, and some say China has leaned on Qatar and Saudi Arabia to avoid financial pledges until the last minute, 2015, in order to stave off pressure for China to make contributions too.

The Lebanese youth campaigner Wael Hmaidan, from Climate Action Network, told BBC News that young people in the region expected Qatar and other wealthy Arab nations to do much more.

"We know what climate change will do to the human situation on the planet - we need to show what we are going to do about this.

"Arab nations haven't yet made decisions on this. The Qatari presidency really needs to get a grip of this process."

The president of the conference, Abdullah bin Hamad al-Attiyah, told BBC News that he had tried in vain to create a joint Arab position on climate.

"I want us to move together on climate change but I can't get consensus on this."

"These talks have succeeded in sorting out some outstanding technical business but what's dreadful is that it hasn't done anything to reducing emissions now. The hot-air deal will probably result in emissions being increased.

Lidy Nacpil, director of the Asia/Pacific branch of NGO network Jubilee South, called on delegates to reject the negotiating texts:

"We are a million miles from where we need to be to even have a small chance of preventing runaway climate change," she said.

Ms Nacpil is based in the Philippines which is currently experiencing devastation as a result of Typhoon Bopha.

She puts the blame for failure on rich nations, especially the US, Canada and Japan which refused to sign up to a new interim commitment for the Kyoto Protocol.

Asad Rehman, for Friends of the Earth International, also dismissed the European Union's offers as:

"An empty shell, an insult to our futures. There is literally no point in countries signing up to this sham of a deal, which will lock the planet in to many more years of inaction."