Economist: Theatre of the absurd: After three failures, this year’s UN climate summit has only modest aims 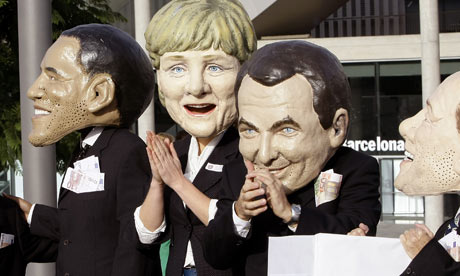 (Economist) Never let it be said that climate-change negotiators lack a sense of the absurd. Thousands of politicians, tree-huggers and journalists descended on Doha this week, adding their mite of hot air to the country that already has the world’s highest level of carbon emissions per head. The feeling of unreality is apt. The meeting comes amid gathering gloom about both the speed of climate change and the chances of implementing policies to keep the rise in global temperatures below 2°C.

The jamboree in Doha is the 18th UN climate-change summit, but the third since a landmark one at Copenhagen in 2009. That year, instead of negotiating a big new treaty to go beyond the timid Kyoto accords, America, plus China and other big emerging markets, announced a deal outside the UN framework, promising to cut emissions but leaving the talks in disarray. The next year, at Cancún in Mexico, others bowed to the inevitable and brought the “Copenhagen accord” within the UN framework. The year after that, at Durban, with the obligations that Kyoto put on rich countries about to expire, countries promised more talks about talks, saying they would negotiate a new climate regime by 2015 and have one in force by 2020. The Doha meeting begins that negotiation.

In other words, the first period of the Kyoto accord ends in December with no new treaty to replace it and no prospect of one till 2020. In its second period, Kyoto has been reduced to a shadow of its former self. Russia, Japan and Canada have either pulled out or said they will not make any new promises. A climate-finance system, Fast Start Finance, set up at Copenhagen to help poor countries pay the costs of mitigation and adaptation, also ends this year, without being fully funded. Worst of all, no country has made significant pledges to cut greenhouse-gas emissions since the Copenhagen conference and its aftermath. Climate policy is going nowhere fast.

The latest report from the United Nations Environment Programme (UNEP), published on the eve of the Doha conference, is alarming. In 2012 greenhouse-gas emissions reached 50 gigatons of carbon equivalent—20% more than in 2000 and roughly 14% above where emissions need to be in 2020 to hit the 2°C target. If emissions are not cut, the UNEP reckons, they will reach 58 gigatons in 2020—14 gigatons more than they should be. This is a vast excess, equal to the total emissions today of America, Europe and Russia combined.

At Copenhagen, countries made various pledges—some firm, some conditional—to cut emissions. Brazil said it would reduce them by 36.1% by 2020; the European Union offered a 30% reduction below 1990 levels as long as others cut, too. If countries meet the unambitious, loophole-ridden versions of their pledges, the UNEP reckons it would make little difference to emissions. Even the ambitious versions would leave countries less than halfway to the 2020 level required to keep the global temperature rise at 2°C. And emissions would still be going up, not down.

Several recent reports seemed to abandon hope of keeping to that limit. The International Energy Agency said the chance of doing so was virtually zero. PricewaterhouseCoopers, a business-services firm, asked whether it was “too late for two degrees?” and concluded it probably was.

Instead, people have started wondering what the world might look like if it were 4°C or 6°C hotter. A new report for the World Bank by the Potsdam Institute for Climate Impact Research paints an ugly picture. Oceans, the study says, would rise by 0.5-1 metres by 2100, devastating coastal cities and bearing especially heavily on East and South Asia. Three-quarters of tropical forests could die, including many in Indonesia, India and the Philippines, adding further to global warming. Crop yields would fall overall and droughts would become more common and severe (even if, at the moment, they may not be spreading everywhere).

Alas, the Doha conference is unlikely to play much part in stopping it.

Posted by Rajan Alexander at 10:19 PM