(CFACT) This year’s climate conference in Qatar – though in the public eye – is the most secretive ever.

The U.N. has never really enjoyed allowing any debate about the climate. At the first annual climate talks I attended, at Bali in 2007, the then chief clerk of the conference secretariat – at no notice – threw us out of a validly-booked room because too many of the Press were attending our daily press conferences.

She also complained to my head of delegation because I had dared to write an article for the Jakarta Post recommending my fellow delegates to deal with the non-problem of global warming by having the courage to do nothing about it.

In those days, though, we had the right to attend just about every negotiating session; to meet and talk to national negotiating delegates; to leave letters on their desks, and to watch the negotiations as they unfolded, blow by blow.

Not any more. The Committee for a Constructive Tomorrow, the only environmental group that the U.N. allows to voice any alternative to the imagined (and imaginary) “consensus” at its annual talks about talks about the climate, has been too effective.

Last year, half of the prolix negotiating text at Durban was hastily dropped within half a day of my blog posting revealing what not one of the world’s news media had bothered to cover – namely the actual contents of the final negotiating text, including proposals for a World Climate Court, rights of legal personality for “Mother Earth”, and a halving of CO2 concentration, which would kill most plants and animals.

Today, as yesterday, I tried to get a copy of the Doha draft. However, the U.N. has gone paperless (nominally to make a petty gesture towards cutting the staggering but irrelevant “carbon footprint” of these conferences). Now it is almost impossible for anyone to track down any of the vital documents. They seem not to be available from the “PaperSmart” booth (“not much Paper and not that Smart”, as one disgruntled delegate put it).

Nor can one get into most of the negotiating sessions, which are labeled “Parties and Observer States Only” on the official timetable – if you can find one. I tried to get into a plenary session, but it had been canceled without warning, leaving dozens of us sitting in an empty conference hall for over an hour.

Since it is no longer possible to follow what is going on at these conferences even if one is an accredited delegate, I decided to visit some fringe events and talk to some journalists.

I put on Qatari national dress (a white djellabah and black-corded kheffiyeh), which a prominent Doha businessman had unexpectedly presented to me at dinner the night before. The outfit is astonishingly comfortable in the Doha climate – cool in the heat of the day and yet warm enough to sit out and drink sweet green tea in the suq as the crescent moon of Islam climbed above the Sultan’s turret.

The security inspectors, wearing Arab costume identical to mine, were startled to see a paleface staring out at them from under the seemly-pinched wimple of the kheffiyeh. One of them helped me to arrange it in the distinctive and stylish Qatari fashion.

My first visit of the day was to a thinly-attended press conference given by SustainUS, a heftily-funded Obama-supporting youth group. I arrived in the room just half a minute before the previous press conference was about to end, and stood quietly by the door so as not to disturb the speakers. 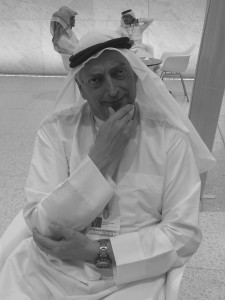 At once a bossy woman from the UN leapt up from her seat by the door and told me that I was obliged to follow the Rules for Press Conferences (which, as far as I know, have never been promulgated publicly). I told her that she should address all such points to our head of delegation. She snapped that one of the rules was that immediately upon entering a press conference one must sit down.

I pointed out, reasonably enough, that the previous press conference had now ended.

SustainUS told us that Hurricane (sic) Sandy was All Our Fault, and young people who had put Obama into office now expected him to do as they told him, or else.

I pointed out that Sandy was not a hurricane but an extra-tropical storm; that global warming had had precious little to do with it; and that the proof that neither Sandy nor any other extreme-weather event in the past few years could possibly have been caused by global warming was that there had been none for 16 years.

Next, I had arranged to meet a journalist from one of London’s leading daily newspapers. He walked straight past me, not recognizing me in my Qatari dress, and jumped when I waved to him.

He said he would like to spend some time walking through the conference with me. I took him to see the freak-show in the Exhibition Hall, where various fringe groups had set up booths the size of rabbit-hutches (at great profit to the U.N.) to promote everything from Climate Gender Equality Rights, which the journalist knew about and rather approved of, to perpetual motion power stations, which he rather didn’t. “Bang goes the second law of thermodynamics,” he murmured.

He took me to meet the spokesmen for the UK Met Office, whose recent forecasts – delivered by a $50 million computer that uses enough electricity to power a small town whenever it is turned on – have consistently exaggerated global warming.

After we had had an amiable scientific discussion with the Met Office, whose spokesmen said climate sensitivity was not really their thing, the journalist asked me the standard question: “But what if you’re wrong about the climate?”

In that event, I said, after 16 years without global warming there would plainly be plenty of time to adjust if I were wrong, but those 16 warmless years suggested I might be right.

Then he said something highly revealing: “How do you dare to question doctors of climate science who have spent nine years studying their subject?” This, of course, is the clapped-out logical fallacy of the argumentum ad verecundiam, the fallacy of appealing to the reputation or authority of an expert.

His deployment of this fallacy showed that – though he was himself a mathematician – for political reasons he had not the slightest intention of using his knowledge to verify any of the supposed “facts” about the climate that had been handed down to him from on high by those “doctors of climate science” with their “nine years’ study”.

My answer was that one should check what it was within one’s own power to check. If that checking revealed the clock striking 13, then it mattered not a whit how many years’ study the promoters of error had devoted to their subject. They were wrong.

The journalist was unmoved. He said he knew of no climate scientist who had ever expressed a point of view contrary to the imagined “consensus”. And this even though, just moments before, I had mentioned a dozen names, with the dates of their leading papers, during our conversation with the Met Office.

This was a closed mind. There are many of them here – not merely unwilling but by now unable to think independently for themselves. Once the Central Committee has handed down the party line – hoc volo, sic iubeo, sit pro ratione voluntas – they switch off their brains, salute, obey, and become grievously offended if anyone, however justifiably, dares to show any signs of curiosity.

I had come straight to Qatar from Vilnius, where I had given the annual address to the Lithuanian Free Market Institute, whose president had later taken me to visit the Museum of Genocide in what had been the KGB headquarters and prison during the 50-year Soviet occupation of his brave country.

There, among the miserable cells that have been kept as they were when the KGB had fled Eastward after the collapse of the Berlin Wall, I saw the evidence of how anyone who had – however mildly – questioned the Party Line or told jokes about the Central Committee had been locked up, starved, made to stand all day at least 18 inches away from the cell walls, allowed to visit the bathrooms only once a day and to shower in cold water only twice a month, interrogated for days on end without sleep, tortured unspeakably, and killed without mercy. I wept.

Wherever there are closed minds, cruelty and death may not be far away. Let us open those minds while there is still time.

Posted by Rajan Alexander at 9:44 PM