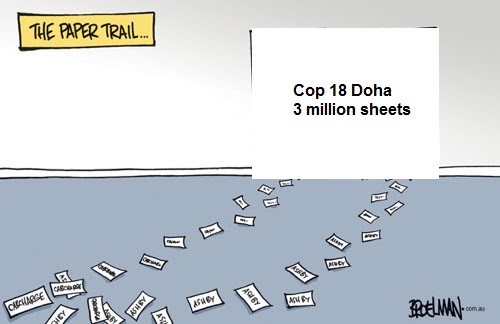 (Bloomberg) To be sure, predicting election results in a democracy is an exercise fraught with peril. During the American presidential election in November 1948, the Chicago Daily Tribune, to its everlasting chagrin and immense delight of President Harry Truman who actually won, splashed on its front page the news of the victory of the Republican candidate Thomas Dewey.

Closer home and to our times, most observers had forecast a victory for the National Democratic Alliance in 2004. So it is possible that two weeks from now, this columnist will have egg on his face. In such an event, he will be in the august company of almost all pollsters and commentators.

When 17,600 representatives from 194 nations criss-cross the globe to fight climate change, they make themselves vulnerable to certain charges of hypocrisy: How much fuel did they burn to get there? What about the carbon pollution from all the hotel air conditioners? How big, really, is the anti-global-warming footprint?

There’s one barb that’s lost its edge this year: paper consumption. United Nations Secretary General Ban Ki-Moon is on a mission to make the global body paperless by 2015. The efforts are saving hundreds of trees at this year’s climate treaty talks in Doha, Qatar, while creating headaches for many of the envoys.

For context, a common feature of COPs (as the annual meetings are called: it stands for Conference of the Parties) are the hundreds of harassed-looking negotiators carting around wheelie suitcases filled with documents covering the progress of discussions on greenhouse gas emissions reductions, finance, technology and -- yes -- reducing greenhouse gases by saving trees.

I arrived at the two-week conference on Nov. 26 to find the huge array of documents that fuel the talks wouldn’t be made freely available in printed form. I’ll confess that I felt a little bereft without a copy of the daily program to inform me of the day’s plenaries, conferences, meetings and side events. (There really are a lot in a conference with 17,000 attendees.)

The stated goal for this year’s meeting is to get paper use down to a meager 3 million sheets.

No expense was spared on paper in the past. Previous meetings tore through about 5 million sheets, the organizers told us. This year’s meeting, COP18, is the first to adopt a “Paper Smart'' system that gives delegates online access to the latest versions of all documents, which are altered line-by-line and word-by-word throughout the talks until a version exists that everyone is equally unhappy with. The stated goal for this year’s meeting is to get paper use down to a meagre 3 million sheets.

So what do the negotiators think of life with less paper? My unscientific survey covered three envoys and a press officer. Bangladeshi envoy Quamrul Chowdhury, who also negotiates on finance issues on behalf of the bloc of 48 so-called Least-Developed Countries, lent fuel to my theory that some countries might be disadvantaged by a shortage of technology.

“In all the 48 least developed countries, how many delegates have laptops, or an iPhone or an iPad? It’s a question of access,” said Chowdhury, “If you don’t have that document in front of you in any form, how can you negotiate?''

To be sure, envoys can still get printed versions, but instead of being able to access piles and piles of already-printed papers, they must request them at Paper-Smart counters dotted around the sprawling conference center, which takes time.

“It has posed an obstacle to some delegations that don’t have sophisticated gadgets,'' said Selwin Hart, an envoy from Barbados. But it’s not just the poorer nations who may be tech laggards. Paper-Smart is also a problem “for old negotiators like me,”

"I hear it from elderly negotiators a lot," said Artur Runge-Metzger, the lead envoy for the European Commission. True to one of the major themes of climate-change negotiations, Runge-Metzger says adaptation is the key. ``People will need to get used to it,'' he said. ``You want to get to the point where you only have those documents electronically.''

The commission's press officer, Tony Carritt, said another problem is that there's nowhere to place flyers and posters to advertise the multitude of “side events'' that groups put on to showcase scientific reports, methods of reducing emissions and debates on issues tied to the negotiations.

“I couldn’t say that the side events are emptier than before, but I think a few people have been disappointed to miss them.''

While actual paper is less visible, statistics about paper use are not. Daily updates on screens along a moving conveyor greet the hordes of delegates funneling into the conference center from the car park. Today, the screen said 1,938,283 sheets of paper have been saved, a 92-percent reduction on usage at the same stage of last year's meeting in Durban South Africa.

A lot of paper has been saved. It translates to 231 trees still standing, according to the screens. That may end up being the most concrete carbon-cutting result of the conference.

Posted by Rajan Alexander at 8:39 PM