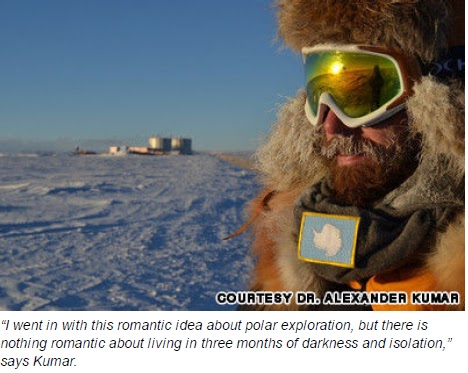 There’s more to surviving winter at the South Pole than keeping warm and avoiding frostbite. It’s the psychological effects the extreme isolation and months of darkness have on the mind that are the real challenge.

Just ask Dr. Alexander Kumar. He recently wrapped up a year at Concordia science station in Antarctica, where he conducted research for the European Space Agency’s (ESA's) Human Spaceflight program.

The 29-year-old doctor has come out of the experience with his humor firmly intact, but he now sports a shock of white hair in his dark fringe and has lost a lot of weight.

He does, however, have all his fingers and toes intact despite living through temperatures that fell to minus 80 C. 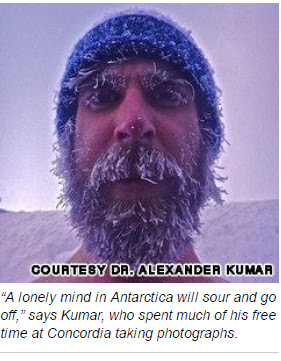 Dr. Kumar was initially invited to join the Concordia team solely as a researcher for the ESA. Two weeks before they were due to set off, the Italian crew doctor pulled out.

Kumar -- a qualified doctor and anesthetist -- took a five-day crash course in dentistry and agreed to step in.

The team took a boat across the Southern Ocean, facing waves the size of houses and steering between icebergs until they reached Dumont d’Urville. From there it was a five-hour flight on a Twin Otter to Concordia station.

As he watched the plane take off from the station he knew there was no way out for nine months. Whatever happened, they would have to wait until November before another plane could get through. Responsible for the health of the team, he was the only British member of the European crew of 13.


“Twelve men and one woman, not a winning formula,” he quips.

Antarctica is the coldest, most isolated place on the planet, with what Kumar calls “the worst winter in the world."

First there’s the extreme cold -- the minus 80.4 C low Kumar experienced is only nine degrees off the coldest temperature ever recorded on Earth (minus 89 C at the Soviet Vostok Station in Antarctica in 1983). If you add in the windchill factor, temperatures can fall as low as minus 100 C. 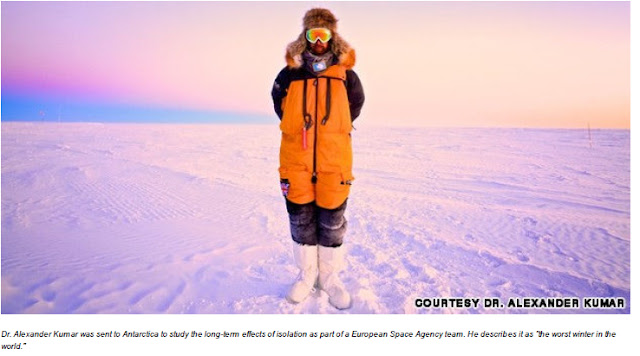 To gauge just how cold this is, consider that if you breathe heavily and continuously -- say if you were running -- at minus 25 C or below your lungs will dry out, freeze and hemorrhage. On the plus side, Dr. Kumar could make iced coffee in less than three minutes by leaving his steaming coffee mug on the window ledge.

Then consider the lack of oxygen. With 30 percent less than normal, breathing is difficult and it can take weeks to acclimatize. Next comes the darkness. For three months the frozen South doesn’t see the sun at all.

“The isolation is very real,” says Kumar. “There is nothing around you for 1,000 kilometers in most directions.”

Posted by Rajan Alexander at 11:02 PM