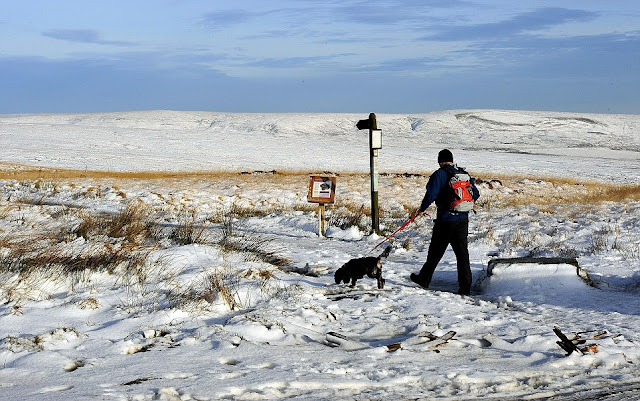 (Daily Star) The ice and snow sweeping Britain will stay with us until February, the Met Office warned yesterday.

It is even colder than experts first forecast and will last a lot longer than they had feared.

The warning, which boosts the chance of a white Christmas, came as snow hit some northern areas and bitter daytime temperatures hovered just above freezing.

An amber alert of severe weather and disruption has been issued with up to an inch of snow predicted in the East, North and Scotland this evening.

The Daily Star Sunday revealed on ­October 28, right, that the Met Office was briefing ministers and transport chiefs to prepare for “slightly below average” temperatures from November until the end of January.

But government weathermen have­ ­upgraded their chill alert, dropping the “slightly” and warning “colder than ­average” temperatures are feared ­until the end of February.

Fears of a big freeze mounted as ­weathermen said even colder, well below average temperatures over winter were now more likely than first forecast, at a 25% likelihood. Chances of “well above average” temperatures were cut further, to just 10-15%.

Forecasters say the risk of snowfall is higher this winter than during last ­winter, the mildest since 2007-08.

The Cabinet Office, councils and ­highways bosses have been briefed that the risk of snow is worse than a year ago, meaning a higher threat of ­transport disruption.

A record near-three million tonne salt stockpile has been amassed. The Met Office stopped making its long-range public forecasts after ­blunders but says its winter forecast is now more accurate than ever. A study showed a new computer programme spots extreme cold patterns missed by the old system.

The weather scientists said their ­winter outlook is based on forecast ­models, past observations and “expert forecaster judgment.”

“This winter is more likely than not to be colder than the same period last year and as probabilities favour a colder ­season than last winter, the snowfall risk is enhanced.”

“The winter outlook shows a change in probabilities, with an ­increased risk of cold and milder ­temperatures slightly less likely. The ­potential for snow is higher than last year’s mild winter.”