The UK, Express: Too Cold for Grit to Work in Britain 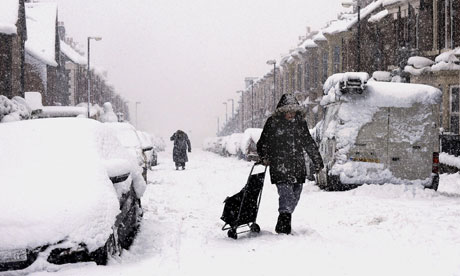 An Arctic blast bringing up to six inches of snow threatens to grind Britain to an icy halt next week. Chaos is predicted on the roads as experts warned that grit will not work in the extreme cold.

It becomes useless when temperatures plunge as low as -16C (3F), they say. This is because rock salt, used on most routes, is effective as an anti-freeze down to -9C. But beyond that it fails to stop ice forming on the road.

Forecasters say Britain faces a “whiteout” with widespread snowfall of up to six inches around the country. Bitter Siberian winds from Tuesday could push temperatures in remote northern areas to as low as -30C with fears of a repeat of the chaos of December 2010 when the UK ground to a shivering halt.

The blast, dubbed “the Beast from the East”, could start to have an effect from as early as tomorrow.

“As well as grit not working below -9C, drivers should remember if it rains it will be washed away and wind blows it away.

“The most important thing is to be prepared. Make sure cars are in tip-top condition and prepare for very long delays.

“Be aware that if the temperatures do drop to below the point when grit is effective, the roads will be icy.”

The Met Office warned a blast of cold air from northern Europe will send temperatures plunging as low as -16C, well below average for the time of year. It issued a cold weather health alert for tomorrow and Tuesday morning, warning of a 90 per cent risk of severe cold, ice and heavy snow.

Jonathan Powell, forecaster for Vantage Weather Services, said Britain faces a whiteout with up to six inches of snow. He said:

“Most places will get a dusting. It really is a belter on the way, with it not looking any better for the rest of the year.

“We are looking at widespread snowfall from Tuesday onwards. It is going to be enough to cause travel disruption with up to six inches of snow likely on higher ground.”

“After a slightly milder weekend it is going to turn much colder next week. From Tuesday onwards the East of the UK is at risk of snow which will drift towards the West during the week. Widespread night frosts are expected with temperatures well-below average for the time of year.”

Forecasters said daytime temperature in the North could sink to a bitter cold -6C while the South will shiver in lows of -3C. By night it could nudge -16C with bitter 60mph gales making it feel much colder.

Bookies William Hill have slashed the odds on the lowest-ever temperature being broken from 14/1 to 8/1.

“An Atlantic system approaching could well bring a widespread risk of snow.”

Temperatures have already sunk lower than the North Pole this week with flights and trains cancelled or delayed while the AA took 5,000 breakdown calls. Yesterday parts of the North were coated in a blanket of white with significant snowfall as far south as Sussex. Forecasters say the big freeze could last into the start of next year. Leon Brown, for The Weather Channel, said:

Posted by Rajan Alexander at 10:18 PM