The Spectator: In Doha, a big green rent-seeking machine 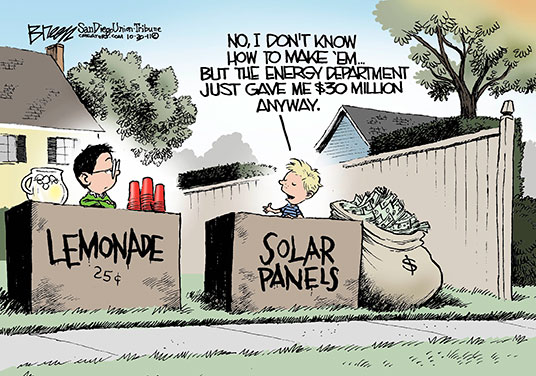 (The UK Spectator) A couple of weeks ago the great global warming bandwagon coughed and spluttered to a halt in Doha, the latest stop on its never-ending world tour. The annual UN climate conference COP18 is no small affair. This is a bandwagon whose riders number in the thousands: motorcades of politicians, buses full of technocrats and policy wonks and jumbo-jets full of hippies travelling half way round the world, (ostensibly) to save the planet from the (allegedly) pressing problem of climate change

This is despite the fact that nobody seems able to point to any great problems caused by the modest warming of the globe at the end of the last century — with global flood and hurricane levels plumbing levels rarely seen in the historical record, global sea ice levels at around their long-term average, new research suggesting that claims of increased levels of drought have been overstated, oh yes, and a distinct absence of any warming — there has been precious little for the delegates to get alarmed about.

The lack of any unpleasant climate change impacts will no doubt have entered the conciousness of the delegates — not least when UKIP’s Lord Monckton hijacked the conference microphone and pointedly explained some of these uncomfortable facts to them — but this knowledge will not have affected their thinking much. The ability of UN conference delegates to ignore empirical facts can at times border on the heroic.

A thick skin is necessary when there are millions of pounds of funding at stake. The vast majority of those present in Doha depend for their livelihood on the perception of global warming as an existential threat. Their jobs are quite simply going to disappear if they come up with the wrong answer about climate change. Any statement that comes out of the UN climate machine — the UNFCC, the COPs, UNEP or the IPCC — has to be seen through this prism. When did you ever hear a bureaucracy announce that it was no longer required?

So faced with a certain unwillingness by some delegations to take the unhinged policy steps that many at the conference advocated, but mindful of the need to keep the bandwagon rolling, COP18 did what UN conferences usually do, agreeing to take drastic (but unspecified) steps in coming years. This seems to have fooled few people, but fooling people is not really the game. Not rocking the boat is. So long as taxpayers continue to fund activist and technocrat alike, so long as there is a COP19 next year, and so long as politicians continue to play along with the charade, everyone is happy. Except the taxpayer, that is.

But while greens have been protecting their rents in Doha, the real action has been taking place in Blackpool. The news that the Bowland Shale, a humungous beast of a gas field under Lancashire, is actually 50 per cent bigger than previously thought, points clearly to a shale gas-dominated future for the UK.

This is an outcome that should in theory please everyone since plentiful gas will unequivocally reduce carbon emissions as well as energy prices. But of course, in reality some parts of the climate debate will not be pleased at all, for the simple reason that the beast from Blackpool puts a fairly hefty spanner in the works of the big green rent-seeking machine. If gas gives you cheap energy and lower carbon emissions, why do you need windfarms? If anyone in DECC had any sense, an immediate halt would be called a halt to the Energy Bill right now.

In reality, however, there is little sign of anything changing. Politicians of all stripes, but particularly Lib Dems, are wary of the green lobby that was built up by Labour and that continues to operate within the civil service. Those who would speak out against the folly of the path we are on must watch their backs. So while new gas-fired power stations will be built and the lights will stay on, greens will be bought off by the continued expansion of the renewables programme. The costs will be astronomical – we are talking about a hundred-billion pound face-saving measure — but the big green rent-seeking machine will roll on.

Posted by Rajan Alexander at 12:41 PM