Oxfam’s spin on Green Climate Fund exposed by WDM: Poor do not receive the money. They are harmed and not helped by such aid. 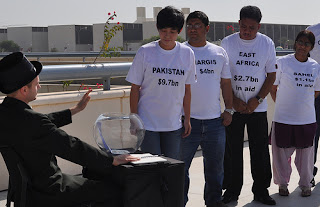 NGOs like Oxfam have made the financing of the Green Climate Fund the number one issue in Cop 18, Doha. And these are some extracts of Oxfam’s propaganda:

“At the 2009 climate talks in Copenhagen, industrialised countries committed to help developing countries reduce their own carbon emissions and protect their people from the worst effects of climate change, such as rising sea levels and droughts, storms and other extreme weather events, by mobilising $100 billion a year by 2020 and establishing an international climate finance fund, the Green Climate Fund.

Yet the Green Climate Fund remains empty – poor countries may be left to deal with climate impacts alone, as developed countries have so far failed to give concrete assurances that they will turn their back on them in the run-up to 2020. If the climate negotiations are to make progress in Doha, then it is vital that the EU and other rich countries set out a credible plan to deliver on their promises.”

Now a another NGO called World Development Movement (WDM) in a study exposed that climate aid does not reach the poor and rather than helped, their situation is made much worse by such aid. 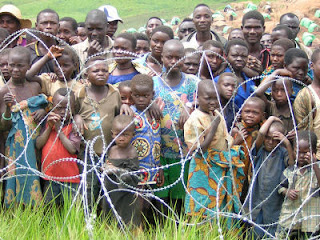 (Telegraph) At the latest round of climate change talks in Doha, Qatar, the UK pledged almost £2bn over the next two years to help poor countries cope with climate change.  A recent example was £385m, channeled through a World Bank project to promote clean energy in poor countries.

WDM say that most of the money went to private companies to build wind turbines or solar panels for profit. Some £10m ended up going towards a 27-turbine farm in the state of Oaxaca in Mexico, operated by the French energy giant EDF, to be paid back in 15 years. WDM claim that all of the electricity is being used by Walmart, the owner of the Asda supermarket chain, rather than for local people. Also land owned by indigenous people was used without their consent.

“While it is good that the UK government has reaffirmed its previous commitments on climate finance, it looks like it has continued to move in the wrong direction in terms of how to spend the money. Most of the money will be spent on projects that put big business rather than the poor in the driving seat. This means we may see more large-scale corporate energy projects which fail to boost energy access.

The UK government is trying to present itself as being progressive on climate change by making this announcement at Doha. But this conceals a pro-corporate agenda which risks channelling money meant for the poor to benefit big business.

The UK’s obsession with bringing in big business at all costs risks leaving projects that help poor people adapt to the effects of climate change without funds. These projects are often not profitable and are therefore not attractive to private sector investors. It is these vital adaptation projects that should be made a priority for support with UK public money.”

Greg Barker, the Energy and Climate Change Minister, insisted that public money will continue to go directly to help poor communities adapt to floods and droughts and other impacts from global warming. But he said that channeling money through the private sector could ensure billions more cash is spent on helping the developing world to go green. He pointed out that UK investors could make money from leading the way on providing low carbon goods and services, not only helping out own economy but those in developing countries. The CBI estimate this sector could be worth £4 trillion by 2015.

Mr Barker said he was pushing for City of London to lead the way in providing the financial instruments such as pension funds, insurance and ‘green bonds’ that will fund low carbon projects. The UK is leading a meeting of private sector investors in Abu Dhabi early next year to develop these low carbon goods and services in the City.

“For me this meeting (in Doha) is about an audacious land grab for global green goods and services market,” Mr Barker said.

Climate change aid is a key part of the UN negotiating process moving towards a deal in 2015. Poor countries want $100bn per year of funding by 2020. A source close to the UK negotiating team said the money announced in Doha was designed to encourage the rest of the world to come forward with climate change aid, especially in Europe.

“Basically we are saying to the French: we have upped our contribution, now up yours.”

Posted by Rajan Alexander at 6:57 PM