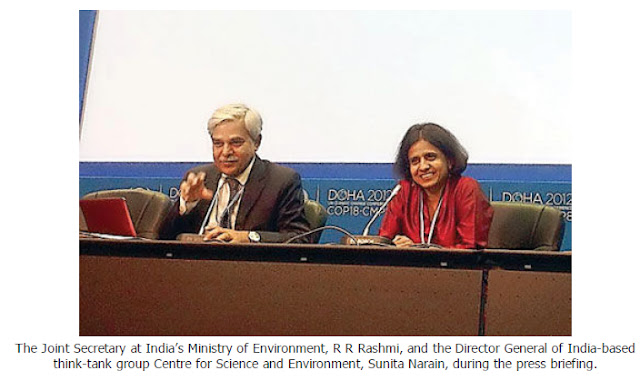 (The Peninsular) India should walk out of the Conference of the Parties (COP18) negotiations if issues such as “equity”, “finance and technology transfer” are not part of the deal. Talks about mitigation will be “meaningless”, and the “pledge and review” will make the planet a common hell, Sunita Narain, from India-based think-tank group — CSE said recently at COP18.

Narain, Director General of the Centre for Science and Environment (CSE), while speaking at the side event of the ongoing UN Climate Change Conference, jointly organised by the CSE and the Ministry of Environment and Forests (MoE), India, sturdily condemned the developed countries, especially the US. She said:

“The pledge and review system of polluting more and more will make the planet a common hell for all, which cannot be accepted.”

With reference to the US emission reduction claims, she lambasted the world’s biggest CO2 emitter, and said:


“To cut 17 percent emissions below 2005 levels (by the US), effectively means cutting nothing below 1990 level. It is meaningless. It is not even worth the paper it is written on.”

CSE has been arguing since Copenhagen that the “pledge and review system” will legitimise the countries right to pollute.

Referring to the “Gigaton gap”, Narain alarmed that the current pledges will ad up to a temperature increase of 2.5 degree Celsius or may be five degree Celsius, which she called “devastating and unacceptable”.

She went on to say: “India and China must take action against the tendency of shifting the burden of cutting emissions on the developing countries.

“The Indian government should take a principled stand and walk out of the Doha climate talks if equity is not made a part of the deal,” she said.

Reiterating on the burden of cutting emissions equitably, she explained:

‘Equity: an integral part of Durban Platform negotiations and why it is an imperative for an effective climate agreement.”

The side event was also scheduled to be attended by India’s Environment Minister, the more vocal and articulate, Jayanthi Natarajan, but she could not fly for the meeting.  During the Durban (COP17), she had said that

“equity is central to any debate on climate change”.

R R Rashmi, Joint Secretary at MoE, who was here to represent Natrajan, as a chief negotiator for India, sounded equally firm but with a much softer tone as compared to Narain. He said:

“Equity is central to achieving the ambition. If the arrangements are not based on this principle, then the ambition cannot be achieved.”

Asked, if the principle of “equity” does not figure out in the deal, will India walkout, he said:

“In the negotiations you never get what you want fully. We have presented a point of view. There is a certain interpretation of equity which is accepted under the convention. It is a question of getting the principle recognised.”

Replying to a question on finance and technology transfer by the developed states, he said:

“It is a very important question. Technology is a key to development and also to reducing emissions. Without making it available to developing countries at affordable costs, all these talk about mitigation is meaningless.”

He added that such technologies are available in developed countries which are protected by Intellectual Property Rights (IPR).

In many cases the cost of IPR is very substantial. Therefore, a platform should be ensured where these issues can be addressed. Narain and Rashmi both asserted that the principle of equity will “establish the road map” and “not derail” the process of growth and development. They also pointed out that developed countries are not complying with their pledges and are trying to fiddle out by writing a new climate convention.

Posted by Rajan Alexander at 9:41 AM