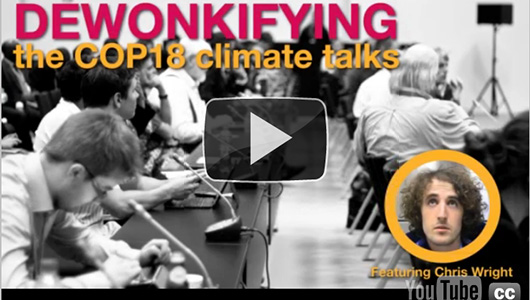 Every year for the past 18 years there has been a high-level UN negotiation in December where 195+ countries attempt to agree on how to tackle our growing climate crisis. The COP (Conference of Parties) is an extradordinarly complex process involving numerous different components which in theory will be bundled together (hopefully by 2015) into a real climate treaty.

The negotiations involve an alphabet soup of acronyms and if you are not part of the initiated few who understand the inner workings of these negotiations it is hard to understand what, if anything is actually occurring here. In reality, the COP 18 in Doha this week could be make or break for the climate.

TckTckTck* has launched a Doha hub to help "dewonkify" what is going on at COP18. It features videos and news, featured reports from the young "negotiator trackers" in Doha along with a live blog of events and a cool social media wall powered by a new company called COZMOS, which brings together tweets, facebook posts, pins, youtubes, and news stories filtered from a list of over 100 people attending the negotiations.

So who is Tck Tck Tck? According to its website:

“TckTckTck is the public campaign of the Global Campaign for Climate Action. The GCCA is an unprecedented alliance of more than 350 organizations from around the world.”

Just who are these organizations? If you click the link you will find the usual suspects - the Greenpeace; WWF; Sierra Club, Oxfam; ActionAid; ChristianAid and similar organizations.

And here comes the irony. Nowhere have they used acronyms as NGOs do. Even after over 30 years in the sector, some of the oft used acronym confounds me.  Given this background it appears almost bizarre that NGOs want to "dewonkify" acronym. More likely, dewonkifying means propaganda based on junk science!