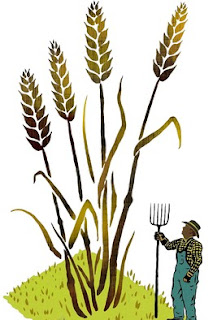 (Matt Ridley) It’s a brave scientist who dares to announce the turning point of a trend, the top of a graph. A paper published this week does just that, persuasively arguing that a centurieslong trend is about to reverse: the use of land for farming. The authors write:

“We are confident that we stand on the peak of cropland use, gazing at a wide expanse of land that will be spared for Nature.”

Jesse Ausubel and Iddo Wernick of Rockefeller University, and Paul Waggoner of the Connecticut Agricultural Experiment Station, have reached this conclusion by documenting the gradual “dematerialization” of agriculture. Globally, the production of a given quantity of crop requires 65% less land than it did in 1961, thanks to fertilizers, tractors, pesticides, better varieties and other factors. Even corrected for different kinds of crops, the acreage required is falling at 2% a year.

In the U.S., the total corn yield and the total corn acreage tracked each other in lock step between 1870 and 1940—there was no change in average yield per acre. But between 1940 and 2010, corn production almost quintupled, while the acreage devoted to growing corn fell slightly. Similar divergences appeared later in other countries. Indian wheat production increased fivefold after 1970, while wheat acreage crept up by less than 1.5 times. Chinese corn production rose sevenfold over the same period while corn acreage merely doubled.

Yet the amount of farmland in the world was still rising until recently. The reason is that increased farm productivity has been matched by rising demand for food, driven by population growth and swelling affluence. But the effects of these trends are waning.

Global population growth has slowed markedly in recent years—the rate of change halving since 1970 to about 1% a year today. Growing affluence leads people to eat more calories, and especially more meat. Since it takes two to 10 calories of maize or wheat to produce a calorie of meat, depending on the animal, carnivory demands more cropland. But as a country gets richer, total calorie intake soon levels off, even as wealth continues to rise, and the change in meat consumption decelerates. Chinese meat consumption is now rising less than half as fast as Chinese affluence; Indians have grown richer without taking to meat much at all.

What the Rockefeller team did was plug some highly conservative assumptions about the future into a model and see how much land would be required for growing crops in 2060. Compared with current trends, they assumed population growth will fall more slowly, that affluence will increase faster and that the gluttony of people will rise more rapidly. Conversely, they assumed that farm yields would rise more slowly than they have been doing. This seems highly implausible given that the gigantic continent of Africa seems to be at last embarking on a yield-boosting green revolution as far-reaching as Asia’s was.

Even with these cautious assumptions, the researchers find that over the next 50 years people are likely to release from farming a land area “1½ times the size of Egypt, 2½ times the size of France, or 10 Iowas, and possibly multiples of this amount.”

Indeed, the authors find that this retreat from the land would have already begun but for one factor so lunatic that they cannot imagine it will not be reversed soon: biofuels.

Posted by Rajan Alexander at 11:09 PM