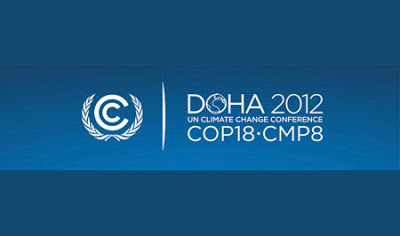 (The Peninsular) The UN climate talks have been stretched by an extra day as the Parties failed to reach an agreement on the draft texts yesterday, despite late night discussions.

According to the original schedule, the COP18/CMP8 President H E Abdullah bin Hamad Al Attiyah was expected to announce the outcome at a 6pm press meet yesterday. But the schedules kept on changing as the talks went on. The final announcement, said the Presidency, would be at a meeting with the media at 9pm. Later came the announcement of the President’s informal ministerial stock taking plenary scheduling to 1am in the wee hours of today.

Ministerial groups were putting their heads together to reach an agreement on four different texts as the newspaper went to press.

The NGOs, Civil Society groups and development organisations are not expecting “good news” from Doha. They said that the Doha summit was not moving in the right direction.

On the key issues of mitigation, financing and emission gap.. it is bad news coming from the conference. The developed countries are not ready to go beyond. On the issue of emission gap, the developed nations are not going to the upper edge of their commitment, NGOs said.

“The text is too weak..the language is not even worth the paper written on..”,

Rich countries have totally failed in terms of their commitment. The finance is in a ‘make or break’ position.. Developing countries see nothing from this conference...,

Addressing the informal stock taking plenary, H E Abdullah bin Hamad Al Attiyah gave enough hints that the Doha package is going to be a `balanced one’ or close to one that is balanced.

Posted by Rajan Alexander at 8:44 AM