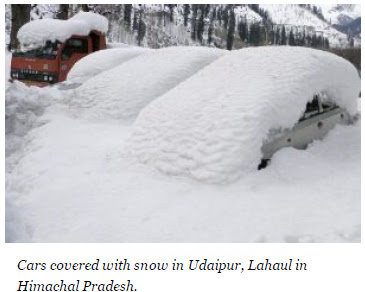 (Times of India) It's snowed in Himachal and there's already a cold wave in Delhi. Soon, tourists from all over the country will flock to the hill station to experience the chill, sometimes even eating the snow.

But life for those living in the higher reaches can get very tough — from lighting a fire under the fuel tank of your vehicle in the morning to melt the frozen diesel just to start it, or pouring buckets of boiling water to free frozen pipes for the liquid to pour out of taps. Often when there's disturbance on their TV sets, people scramble onto the roof to clear thick layers of frost on the DTH dish, opening up the transmission. And it's not unusual to see a queue outside an ATM counter, waiting till noon for the machine to be eased up by the rays of an unsure sun.

In Spiti, even tears turn into crystals

In fact, if you are in Lahaul Spiti, you can't even cry too much as the tears turn into small drops of crystals that stick to your face, making you look somewhat silly.

There will be tourists flocking to the hill stations and towns of Himachal, some of the most beautiful in the country, to celebrate Christmas and New Year, but away from the fun and frolic, life is something else altogether. It's a battle just to stay afloat.

Unbelievable as it may seem, the first thing Sher Singh Bodh, a resident of Keylong town in Lahaul-Spiti district, does after he wakes up is boil a bucket of water to pour over frozen taps. Then he lights a fire under the fuel tank of his jeep. But he's used to it by now - in Lahaul valley, the cold desert of Himachal Pradesh, even wall clocks freeze up. So do wrist watches and cellular phones.

The chill froze the only ATM machine of Lahaul last fortnight and bank officials have been heating it up every day to make it work. Fearing electronic voting machines (EVMs), too, would meet the same fate, the Election Commission had them shifted from Lahaul to Kullu soon after assembly elections on November 4.

River Chenab, which originates in Lahaul-Spiti and feeds the fields of Pakistan, has already frozen partially. With the closure of the Manali-Leh road due to heavy snowfall at the 13,050-feet Rohtang Pass, people in Lahaul-Spiti are now locked inside the valley, with the only mode of transport for them being state-run choppers. For tourists then, it's best to limit the travel to Kufri and thereabouts, where you can ride yaks and eat some snow.

Posted by Rajan Alexander at 3:32 PM